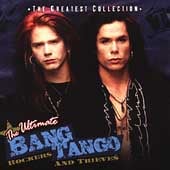 Review:
I’ll be completely honest – I never really knew much about Bang Tango until recent years with the inception of Beautiful Creatures and the incredible new Bang Tango CD titled Ready To Go which completely won me over. I knew “Someone Like You” but that was about the extent of my knowledge of the band. I wasn’t wrapped up in their records like I am with Ratt, L.A. Guns, Dokken, and so forth… But, I am almost there now!

I picked up two Bang Tango discs after I gave Ready To Go a chance. Those two selections were Psycho Cafe and The Ultimate Bang Tango: Rockers And Thieves. I was going to pick up the Greatest Tracks release but I couldn’t find it in stores (they only had Ready To Go) and Amazon was sold out. So I went with this one instead and I’m pretty impressed.

This is basically a “greatest hits” collection put together with live performances. It’s a solid overview of the band but if you truly want to get to know what the band is about, you have to buy complete albums as there are a lot of gems that didn’t make it onto this disc. For example, “The Hell I Gave” is not on this disc even though it is one of my personal favorite Bang Tango cuts. But the collection of songs on here are relatively indicative of what Bang Tango is all about.

Bang Tango‘s sound is very diverse. Joe Leste has the ability to tell different stories with the tone and range of his voice. You talk about an unsung hero when it comes to great vocals? Joe Leste is at the top of that list. The man has a set of pipes on him, that’s for damn sure.

Speaking of their diversity, take a song like “Do What You’re Told” and then skip down a few tracks to “Midnight Struck” performed with female artists who sound like gospel singers… You’ve got a fast paced rocker and a tender love song. Some modern bands might look at Bang Tango doing a song like “Midnight Struck” and mock them because it is unlike their sound. Nobody today has the guts to tell these bands and artists the truth but I’ve never been called a coward in my life so allow me to take a crack at it. Modern rock bands suck because their albums have no diversity and they all are the same tone with no different songs. And they didn’t omit guitar solos because they’re “80’s,” they omitted guitar solos because their guitar player sucks and can’t perform them. As for rappers mocking soft songs, what do you call your “slow jams” boys? Same thing, just without any musical integrity or real vision.

The album closes out with some of Joe Leste‘s appearances on recent tribute albums including the Scorpions‘ “The Zoo”, Def Leppard‘s “Rock Brigade”, Motley Crue‘s “Starry Eyes” (which is a remix and blows because Joe Leste is not an electronica singer and I don’t want to hear him like that), and Guns N’ Roses‘ “Mr. Brownstone”. All except “Starry Eyes” are very well performed. If you haven’t already, do pick up those tribute discs titled Covered Like A Hurricane, Leppardmania, and A Rock Tribute To Guns N’ Roses. All are a very interesting and cool take on some classic songs by artists we already know and love.

This album is worth a listen if you are curious what Bang Tango is all about, and if you are looking for something to hold you over before their newest record hits the stores in 2006 called From The Hip, this could do it. They are a great band and have some really cool songs with a sound all their own… I’d say it’s Guns N’ Roses mixed with a dab of funk. Anyway, this is a great band and a good album. 4/5 stars with the 1 star being taken away for that bullshit remix.