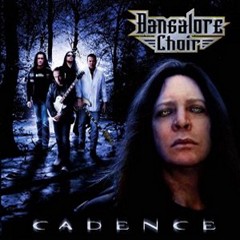 Review:
Eighteen long years, and one failed reunion attempt, since the release of On Target back in 1992 and Bangalore Choir has finally returned. As much as I’d like to call this a full-blown Bangalore Choir reunion, I can’t help but feel it is a David Reece solo effort with a couple of the original band members making guest appearances. The reason I say this is because Cadence sounds closer to Reece‘s 2009 Universal Language CD than it does to On Target, which is understandable considering the song-writing duo of Reece and Andy Susemihl were front and center for both releases.

With former Bangalore Choir members Curt Mitchell and Danny Greenberg along for the ride, David Reece takes them and the band in a more mature direction. That’s not a bad thing, but may disappoint a few who were expecting a carbon-copy replica of On Target. But give the guys a break… it’s been close to twenty years since that album and times have changed. While the comparisons to Universal Language are unavoidable, Cadence is more focused (with less experimenting) and rocks slightly harder.

“Martyr”, “Tomorrow”, “Heart Attack And Vine”, “Dig Deep” and “Sweet Temptation” represent a new side to Bangalore Choir, but is the perfect evolution of the band — and I just can’t picture the old group tackling something as heavy as “High On The Clouds” back in the day. Dripping with solos, harmonies and David Coverdale reminiscent vocals, this 14 song collection is a great addition to the Bangalore Choir legacy. Reece still has the chops, as we have heard on his many releases of late, and the musicians rounding out this version of Bangalore Choir are more than qualified. My only complaint is that it would have been interesting to hear what the returning members could have brought to the song-writing department, but maybe that can be revealed on their next release?

Some of the ‘fun’ may have been taken out of Bangalore Choir, but these guys aren’t in their twenties anymore. Everyone has grown up and thus wants to explore topics deeper than getting into a girl’s pants. You can’t fault David Reece and company for that… and even though the band has evolved considerably since we last heard from them (even the artwork displays the change in attitude) at least they can still write some damn good rock songs!