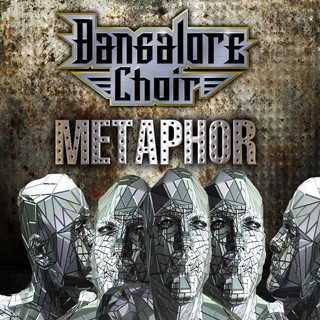 Review:
How does a band go from adorning their album artwork with a sexy, cleavage adorning female riding a bomb to this atrocity that looks more suited for a prog-rock release? I should know by now not to judge a book by its cover, but in a way the artwork for Bangalore Choir‘s third studio album Metaphor is a testament to the group’s maturing sound. Following the blueprint laid out on their return effort Cadence, Bangalore Choir have become far more melodic and ‘safe’ than they displayed in their sleazy beginnings.

I was quickly ready to write-off Metaphor, yet with time the album grows on you. It still doesn’t match the band’s underrated 1992 debut On Target, but the musicianship here (provided by 3/5’s of the original band) is top notch and everything is placed where it should be. And that might be part of Metaphor‘s problem — it is almost too predictable and one-dimensional, rarely catching the listener off-guard.

“All The Damage Done” is a great opener that finds Bangalore Choir and frontman David Reece at their hard-hitting best. “Trojan Horse” quickly follows with an over-the-top chorus that gives the song and extra kick, while “Silhouettes On The Shade” follows a similar formula. “Don’t Act Surprised” may be the best track on the album with its Whitesnake influenced sound and feel, while the swamp-boogie of “Never Face Old Joe Alone” is one of the few times Bangalore Choir venture from their comfort area (with mixed results). However from here on out Metaphor pretty much follows the same pattern with little in the way of tempo changes or surprises. The vocal delivery is meticulous, the guitarists place solos in exactly the right places, the rhythm section is as steady as can be, and the production is flawless — yet each of the melodic/AOR tracks quickly become interchangeable as Metaphor progresses.

The title to the song “Civilized Evil” pretty much summed up my feelings towards the album as a whole — it may want to be ‘evil’ and ‘nasty’, but it’s hard to accomplish that while being ‘civilized’. Metaphor isn’t so much disappointing as it is predictable, and to me it sounds more like a David Reece solo album than Bangalore Choir — just like Cadence did. By now you know what to expect from the current version of Bangalore Choir, and in that respect they deliver — its just that they don’t capture the sound of their formative years, and I think it’s safe to say they never will or even have interest in doing so.