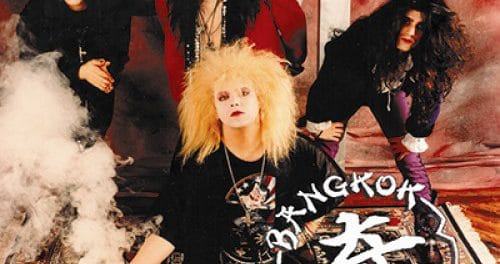 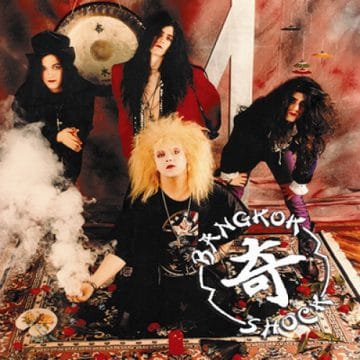 Review:
My first encounter with Bangkok Shock was in the mid-90s in Las Vegas. I came across many of their flyers posted throughout the city and got to see them numerous times during my many trips to Vegas in those early days, plus connections and friends on LA scene also helped the process. I thoroughly enjoyed the bands catchy Ramones meets Faster Pussycat glam punk. So, needless to say, I was excited at the aspect of listening to some early material from the band. So I’ve come to find out that this band is NOT the same band I know from Las Vegas. This band version hails from Chicago, who after they dissolved — two of the members, the twins Darrel and Brian Masterson went on to form the Orphan Punks (who are another huge fave of mine )

This release gathers the demos and live material of the early stages of the band and I must say, it’s a tad different sounding from what I was expecting. This is interesting in itself because both bands, Las Vegas’ version Bangkok Shock and the Chicago version, have a slight similarity in sound. Las Vegas’ Bangkok took on the aforementioned Ramones / Faster Pussycat sound with a healthy dose of sleaze and minor punk elements while the Chi town version took on a slight pop punk sound. Okay then! Enough of the history lesson and on to the album itself.

The sound of Bangkok Shock at this point is a bit of the sound they splintered off to. They are all quick and to the point songs and it’s a gathering of songs from early demos. Some are not as catchy or fully formed while others don’t quite reach out and grab me. Not that they are bad in any way because they do have some cool moments. “Junior Prom Cherry Bomb” is a great listen.  Other standouts are “The Avenue” with its catchy chorus, “Culture Slut” and “One Kiss Bangkok” are cool also. Also of note, singer Spider St. Valentine sounds a lot like Kim Hooker of Tigertailz fame. So for those curious on a sound basis of Bangkok, I would say a cross of Tigertailz plus a lil bit of City Kiddz too.

Other tracks are sort of standard in their approach. There are multiple versions of the same songs, some being studio and live versions, plus song commentaries and an interview of guitarist Dezzy speaking of since deceased drummer Brian. Production for this release is not too bad for its day and there are minor fluctuations in sound quality. Thank God for remastering! I guess one minor complaint is that on the live songs, be careful to have the volume down, because the crowd noises are really loud and there is a girl screaming very loudly at different times, which can get a tad annoying. It’s like she is screaming in your ear… literally! If you got headphones… So all in all, not a bad release and it’s cool to see the history of where your favorite band (bands) got their start. A good time capsule release of old faves for those new recruits to delve into the glam world.

Reviewed by Will “Bones” Lee for Sleaze Roxx, July 2017