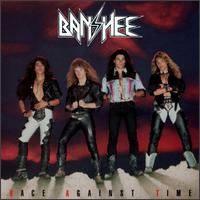 Review:
These hard drivers were the talk of Kansas City back in 1989 with their Atlantic debut album Race Against Time. Wait, what’s that? Kansas City? No, no, I must be mistaken; the only killer metal bands in the 80’s were the ones from L.A. Not this time. Banshee packed all the flash of the Sunset Strip, yet combined the edge of an East Coast band. With every song on Race Against Time a stand out, this album was, like many other fateful rippers of the time, way overlooked.

Banshee had released their debut album on Metal Blade records in 1988 with its sound drawing directly from the harder edged bands of the time like Metallica. With only a handful of songs on the debut, Banshee was picked up and polished up by Atlantic and shot out 11 songs of pure genius on Race Against Time. The first track (and only video) “Shoot Down the Night” is an undeniable anthem. From first listen, the song is in your head all day, that’s saying something. Yet “Shoot” also gives you a bit of a false image of Banshee upon first listen. Judging by this song, you would assume Banshee to sound very much like an L.A. “pop-metal” band, much more polished than their debut. But the songs that follow could have easily been written for Savatage, but are pulled off wonderfully by Banshee.

The next song that sings PURE POWER ROCK is track six, “Precious Metal,” a song that rivals “Shoot Down The Night” for the #1 pick of the album. From it’s odd opening, to the scream of lead singer Tommy Lee Flood‘s killer vocal kick off of “DRAW!!,” only a corpse could resist banging their head to this one.

As the album gets into it’s closing numbers, the diversity of the band comes through. With the almost “rap-like” drum beats of Kent Burnham and thundering bass of Bill Westfall, songs like “Desire” and “Get It On The Run” show you the true talents of Banshee.

So many albums of this era went virtually un-noticed, which is a crime in itself, yet that is what makes them gold in 2002. Terry Dunn was a Kansas City guitar virtuoso in 1988/89, and basically disappeared by the early 90’s. Yet track-by-track, his legend, as well as the rest of Banshee, lives on forever in the masterpiece “Race Against Time.”

Buy The CD:
Purchase At Amazon.com
Purchase at eBay.com