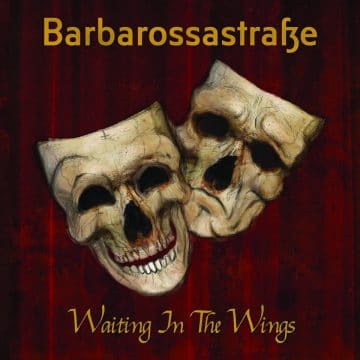 WAITING IN THE WINGS
Released on December 7, 2018 (Volcano Records)

Review:
In the immortal words of the infamous American legend / actor Gary Busey from his poignant role in the Stephen King adaptation to the big screen Silver Bullet, Gary stated upon laying eyes on the movies antagonist “Jumped up Jesus palomino.” Truer words could not have been said upon my hearing the sophomore long play from the Sienese (that’s Siena, Italy for those with no geography schooling) hard rock quartet Barbarossastrasse. The album Waiting In The Wings is a text book tutelage in ’80s hard / sleaze / glam / melodic rock n’ frickin’ roll. Now wait Barbera who? No, Barbarossastrasse. That’s a stretch of road in Berlin. Yep, Germany. But what? The band is Italian. Yep, still a bad arse name that only accentuates and enamors the listener into that mystique that comes with the territory of those long lost bands from our yesterday, the ones we cut our (and so did the boys in Barbarossastrasse) teeth on. The ones that warped, I mean instilled, those hard rock sensibilities that have us here reading this review and clamoring for artists like Barbarossastrasse that keep carrying the torch.

Waiting In The Wings as mentioned is the band’s second release, written and labored over for over two years! A labor of love and a much appreciated effort indeed, at least for these ears. Lead off track “Here To Stay” can be best described as a toe tapping, hard rock number with a nice galloping and ominous verse akin of early Skid Row with a powerful chorus that is incredibly infectious.  “Backdraft” keeps the tempo very up with its again heavily Skid Row influence in the rhythm, verse and chorus. The song has that “Monkey Business” stop start and music, stop, drums plod along sensibility that are a very nice and staple of the ’80s hard rock stylings we enjoy. “Waiting In The Wings” dials back a smidge and dabbles in the more melodic, still rocking but in a subtler sense. More arena rocking and certainly quality, and I see why they picked it as a lead off single. Vocalist Dario and company cement the Killer Dwarfs influence on this track that is layered in with the Skid Row and early Mötley Crüe nods that are the band’s main influences. “Waiting In The Wings” has an excellent negative syncopated rhythm after the chorus that I rather enjoy being a musician myself. I appreciate that technical expertise in my rock n’ roll, subtle, but which has a very cool impact on the overall song.

“Nowhere Train” can simply be summarized as the band’s “Hot For Teacher.” Massive nods to Van Halen on this one in the chorus and musical proficiencies. After the tasty solo in the lead rhythm build up to the chorus once again, I half expected to hear David Lee Roth announce “Class dismissed!” “Hereafter” is what was once a staple cigarette lighter ballad that all the bands attached to their releases back in the day. This is a very nicely played number showing a continued variance in the band’s style and influences. If this song was released as the second single back in circa 1988, the band would have been hobnobbing with Extreme and others on an endless arena tour. This is a really great tune and the acoustic solo and the tempo change up thereafter is again another nice music geek touch that emphasis these players’ skill set. Up next is “On The Loose” which as the title implies, time to buckle up and hold on tight, as the boogie woogie rock n’ roll caravan is hitting the road and you better lock up your daughters and mums. As can be expected, this one is super sleazy, glamy and rocking. Think D’Molls Strut and maybe some Roxy Blue and that ilke.

“Praise The Storm” has an Alice Cooper vibe to it but is a complete Killer Dwarfs‘ Dirty Weapons influenced hard rock number with a nice verse and catchy as all get out chorus. It’s probably a favorite for me, but damn, like Lays potato chips claim, you can’t eat just one. Well, I can’t pick just one either! “Mexican Standoff” is another text book example of a hard rock number with its 3/4 timing and driving hard rock verse and chorus (which is staggering by the way). Another heavily Killer Dwarfs, early Crüe influenced number. I’m rather smitten with massive “Whoaaaaao!”‘s behind the chorus myself. “I’ll Do It Myself” is another example of a more boogie woogie, rhythm and blues rocker. Again, well written and played with a killer pre-chorus and what sounds like some steel guitar layered in for effect and all around cool points. The pre-solo bass riff is a nice repeated touch that lends itself well to the overall song as does the musical stops that showcase Dario‘s powerhouse of a voice.

Lastly, but certainly not least in any way shape or form, is “It Will Take Some Time.” Goodness gracious, talk about saving the best for last. What a closer! The track starts out very Rush “Raised On The Radio” with its arena rock prowess that starts to build a bit at the chorus that is supremely infectious and heartfelt. This song could very well be this generations “Open Arms”, “I’ll Remember You” or “Still Loving You” if given half the chance, which unfortunately it won’t, but hey, we can dream right?

So I know that’s a bit to digest, a little long winded sure, and a play by play as well, but I was feeling a bit wordy and I haven’t had a disc hit me this hard in a while. Sure, I tend to review stuff quite positively ’cause hey, I give kudos to those that are in the trenches, when I’m sitting at my desk in my corporate 9 to 5 gig. Would I love to go rock it up? Sure, but I’m old and that ship has sailed. But back to Barbarossastrasse and their tireless sophomore effort Waiting In The Wings. Yes, it is a very good record. No diatribe. No bullshit. The musicianship is top shelf, as is the songwriting and production. They have poured a great many man hours of effort in crafting a musical tapestry that will tickle all your fancies and it certainly checks all the boxes. If you love all things ’80s hard rock, and I know you do, than give these guys some love. They deserve it. This my friends, is without a doubt, another Martinsane‘s unknown and must own. Go get it. You will be happy you did.

Barbarossastrasse‘s “Waiting In The Wings” video:

From the album “Waiting In The Wings” out on December 7th, 2018 through Volcano Records Further info athttps://www.facebook.com/Barbarossastrasse/www.volcano…