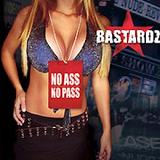 Production:
Produced and mixed by Henrique Baboom and Bastardz.

Review:
This is the debut CD of Bastardz, a Brazilian glam metal band which always plays Sao Paulo underground parties for a long time. They have glam looks (influenced by old school glam as well as the “new glam” bands) and play great party rock music. This independent release brings us five well recorded tunes with a great album cover (winner of the Roadie Crew Magazine’s “Best of 2004” contest) and a high quality booklet. This album also marks the first recordings of the new singer Nat Reed.

“Pills” – Insane background effects, spoken vocals and solid guitar riffs make this one great opening track. This song will be the first video off this album.

“Grab Her By The Tail” – Another great job of the guitar thanks to Thomas Buttcher and Danny Michaels. Nat‘s vocals sound a little lost in this song though.

“Wasted Generation” – This is the one! Ripping guitars, great lyrics and great hooks, what else do you need? Nat did a great job on this song reminding me of Pretty Boy Floyd‘s Steve “Sex” Summers‘ vocals.

“Spider Sarah” – A more traditional hard rocking tune. Not as catchy as the others, but it is fine.

“Alleycat Spoiled Brat” – Sounding a little like Faster Pussycat‘s first record, the last song of the bunch rocks. The vocal melodies and Thomas‘ leads are the highlight of this track.

You can find this record on Perris Records‘ website as the band keeps on looking for a record label to release it in the U.S. – don’t miss it. Samples can be found at www.bastardzweb.com.