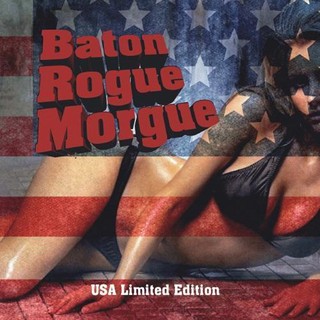 Review:
This album grabbed me out of nowhere. I stumbled upon a Baton Rogue Morgue video online, the bloody yet amusing “Hellride”, and then discovered they had released a CD. The funny thing about USA is that, even though it is my first encounter with the Finnish band, it is actually more or less a compilation of tracks spanning their almost decade long career. This may be the reason behind the fact that the songs here, though all of them in the rock vein, are relatively versatile — as Baton Rogue Morgue have clearly been looking for their sound ever since their beginnings back in 2005.

USA is all rock really, but with different flavors — there is more hard rock on some songs and more heavy metal on others, with the band even doing a version of Slayer‘s “Tormentor” at one point. The band’s sound is double guitar driven hard rock, but more chord-oriented, with some really tasty solos. The production is all around good too, not extensively over polished, with one track, the aforementioned Slayer song, even delivered in its demo form. The standout tracks on USA are the earlier mentioned “Hellride”, the highly energetic “Ride To Die”, and the aggressive “Finger On The Trigger” with a pounding bass line leading the song from the beginning. The final track, “Vultures”, also stands out, beginning like a black ballad but eventually ending really raw and energetic.

One of the guitar players, Domino De La Rogue, boasted in one of his interviews that “today most of the bands suck. We are fortunate to have the element of not sucking” — and that really sums this album up. USA may not be the 8th wonder of the rock ‘n’ roll world but it is a very solid, and a bit unexpected, ‘punch-in-the-gut’ rock album with great musicianship and fine songwriting.

Proof of Baton Rogue Morgue‘s rock credentials may be that on the coming tour of their Finnish home country they will be supported by an additional player, one notorious gentleman by the name of Chris Holmes — of W.A.S.P. fame. So if you are living there check the band’s webpage for tour dates — too bad they rarely venture abroad, as they can stand toe to toe with the best rockers out there.