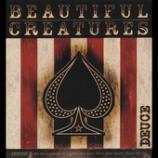 Review by James:
In 2001, a new metal band hit the scene with a different take on the whole concept of what heavy metal in the new millennium is all about. They were groove rock but not rap rock, they were melodic yet not overly pop, they had screaming vocals by a hair band singer, and blazing guitar solos that would make even Angus Young cream his pants. In other words, it kicked some serious ass and as a result, it was buried by the corporate machine to ensure the last few years of Kid Rock and Limp Bizkit‘s popularity, because they clearly would be shown up by a band that actually does get it.

After the Warner Brothers/AOL merger, the promotion behind their self titled debut record was virtually swept under the carpet and the album, while receiving some air play, did not crack the surface of mainstream publicity as much as it should have. That said, you can’t stop metal and the boys are back in 2005 with their sophomore record properly titled Deuce.

The landscape of music has changed some since 2001. Rap rock is out, Tylenol PM induced boring punk pop is in, and there is a very small movement of loud guitar driven metal that still gets attention such as Velvet Revolver and, though I’m not a fan, Shinedown. Needless to say, Deuce is more towards the former.

As a matter of fact, a few songs are very Guns N’ Roses/Velvet Revolver sounding such as “Unforgiven”. That is not a bad thing by any stretch of the imagination. It just illustrates that there is a movement going on out there that is getting very little attention. And why would it? We can’t have Jimmy Eat World out back eating cardboard when the world finds out they are talentless hacks, can we?

What I like best about the record is the attitude. For a while there, confusing the hell out of true rockers everywhere, the rock attitude was “I hate my mommy” and “I think I’ll cry even though I’m rich and married to a beautiful woman.” That still is the case on radio pop rock today. That is NOT the case on this record and this album’s attitude is illustrated on the very first track, “Anyone.” The lyrics to the chorus are, “I don’t want to be just like anyone, I don’t want to be just like you.” Daring to be different? Can we still do that in rock ‘n’ roll?

The attitude continues with “Never.” Cool effects are used on this song that for some reason remind me of a Lita Ford song though the title of that song escapes me…. It also reminds me a bit of Judas Priest‘s 1988 hit “Turbo Lover” in the effect. But, the song itself is very different than both before mentioned songs. This is mildly angry which is okay in moderation. I dig it because I think every true metal head has had a significant other try to change them out of their metal garb and their taste in music. Hell, this may as well be my theme song. Lyrics include, “I’ll never do what you want me to do. I’ll never be what you want me to be. I’ll never be what you want to see.”

“Straight to Hell” rocks, it’s just a fast rocker that really hits the spot. The same can be said of “Superfly”, though it seems to have a little more kick behind it. I’ll credit Jimmy Snuka for that… Shout out to my wrestling friends who actually got that one!

There is a softer side to the album as well. “I Won’t Be The One” is a ballad which closes out the record. I don’t care for this track all that much as it is just too weak and modern for my taste. Tommy Russell, the drummer, really earns his money on that cut… Not once does he hit a drum. In other words, it’s like “Simple Kind Of Man” that gets shoved down our throats which makes us ponder if Shinedown actually has a drummer or not.

But let not your heart be troubled. Most of the songs on this record are fantastic. My favorite? Well, thank you for asking! I dig “Freedom”, it just has a great vibe to it and the lyrics kick my ass. “I am freedom, I last a lifetime. There’s nothing like me, I’m one of a kind.” I dig that!

Let’s talk bottom line. Is the record good? The short answer is yes, it is very good. It’s got great and diverse vocals from one of metal’s unsung vocal heroes Joe Leste with great lyrics, musicianship, and killer guitar solos. Is it perfect? Honestly, it isn’t. It’s a great record but perhaps my ripe age of 24 is showing when I almost feel at some point in the record that the sound may have been even a little too heavy for me. Perhaps the drumless wonder that is “I Won’t Be The One” should’ve been placed somewhere towards the middle of the record to break the chaos for a second. It’s wonderful but a little break from the madness would’ve made it perfect.

That said, I encourage those of you who like this record to also pick up Joe Leste‘s other band, Bang Tango‘s Ready To Go. What a fantastic album that is. If you want the melodic rock with more ballads, that album is for you. I’m not sure which one I like better. But, I’m certainly sure I like Deuce!

Review by Carmine Rose:
Beautiful Creatures were a band that was on the verge of hitting it big, but then their label, Warner Bros. was merged with AOL, and their 2001 self-titled debut album sank without a trace. Beautiful Creatures, in the hard rock world is best known for featuring Joe LeSte, formerly of Bang Tango. They were featured on Ozzfest 2001 which gave them some exposure, and “Wasted” hit #37 on the Mainstream Rock charts, but that was as big as they would get. They were then dropped by Warner Bros. and forced to shop around for labels. They started working on Deuce in late 2003. Some say last year’s release of Bang Tango‘s Ready To Go hindered this album’s release. Whether that is true or not, Deuce is here for your listening pleasure.

1) “Anyone” who enjoyed the songs from Beautiful Creatures‘ debut will have no trouble enjoying the first track from this, a mid-tempo rocker which knocks down everything in its path. This is a short song, only about 2:39. Given the length of the song, there is not enough room for a very long solo, it lasts about two seconds, but hell, Joe and the boys are giving it hell here!
Score: 10/10

2) The beauty of “Freedom” is you can rock out to this tune if you want, you can headbang, you can blast it outta your car stereo, you can piss off your neighbors in an attempt to get the rockin, or you can just enjoy the rockiness of this. This is a dirtier AC/DC style rocker with a semi-fast tempo.
Score: 9/10

3) “Unforgiven” has a rather dissonant opening riff that is enough to catch your ear for the rest of the song. I’m still sitting here wide-eyed from that as I’m writing this. No bullshit, dude I seriously am. Tune numero tres (I don’t speak very good Spanish, just happen to know a few numbers) is an overall pretty good tune. Joe‘s voice sounds very much like that on Bang Tango‘s Ready To Go, as a matter of fact the tune is a major reflection of that album.
Score: 8/10

4) On “Save Me”, we see an extremely heavy, yet strangely polished guitar riff driving this song like an automobile, making me wonder why the Creatures had to settle for Spitfire Records!

5) “Superfly” is so FUCKING amazing, I can’t FUCKING give this a FUCKING good enough score. I think the capitalization of the F-word adds a nice touch huh? Metal Sludge-y enough for ya? But seriously, this is hot, I can’t believe how awesome this is. This should be a favorite at concerts, man!

6) “Empty” has some modern guitar effects rolling through the speakers for about three seconds, then stops, and then the sound the Creatures have been doing right along comes in. I’m not too crazy about this song, it rather lives up to its title compared to the other tunes, still manages a not-too-shabby 7.5.
Score: 7.5/10

8) Got something nasty to say to me about my reviewing style? Then you can go “Straight To Hell”! This is a rather fast rocker which doesn’t have the complete powerhouse package like “Superfly” but is a competent track. The solos are wild, wild that is!
Score: 8.5/10

9) “The Unknown” is a 44 second instrumental track of acoustic guitar, which is just plain beautiful, which seems weird considering what’s to come.
Score: 9/10

10) “Ton Of Lead” shows Joe not really sounding like Joe in the verses. This is a mid-tempo rocker driven by both guitar and drums. Not a bad tune, not on par with “Superfly” but it’s way different.
Score: 8/10

11) It’s a “Brand New Day” where hard rock reigns supreme (not really, in terms of radio, but that day ain’t far away). What can be said of this that hasn’t been said of the other songs? Not a whole lot, really. It’s a good tune, but Joe‘s voice isn’t as strong as usual.
Score: 8.5/10

12) Beautiful Creatures deserves some “Thanks” for finally releasing their new album, after four fucking solid years of waiting! My cheesy puns aside, this song shows an edgier side of Joe‘s voice, like that in “Wasted” from the debut. The solo in this song makes up for not having much of one in the first song. The main riff in the verse doesn’t really make me stand up and shout though. Overall a good tune, but the riff in the verse loses this some points.
Score: 8/10

Beautiful Creatures have made this album worth the wait. Fans will like the style they have here. I would go so far as to say this is even better than the debut. So if you liked the debut, you’ll like this bad boy no problem. Even if you didn’t like the first album, you’ll probably find yourself making this a frequent visitor of your CD player.

Essential for fans of: Bang Tango and Beautiful Creatures.