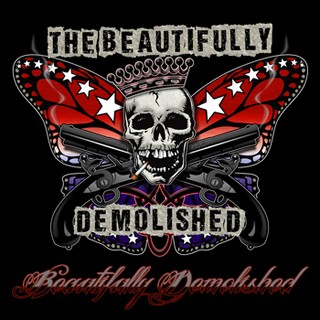 Review:
The Beautifully Demolished is a five-piece band from Los Angeles, California. The band was formed in 2011 around vocalist D.K. Revelle, who briefly fronted Jetboy when Mikey Finn departed the band.

The band’s debut release, a limited three-song EP, kicks off with the party anthem “Beautifully Demolished”. The track is low and heavy but guitarists Jamie Moreno and Finn Zevo kick in some classic rock licks between Revelle‘s grungier vocals. The song features a mix of ’80s rock with some heavier, bluesy and modern influences, entwined to create a catchy if not explosive opener. “Heart Tattoo” is a bit more old-school and nostalgic but is all the more enjoyable because of it — it’s a gentle and rasping track, both emotional and raw, and is pulled off well. The EP closes with “Rock Scars”, a rhythmic stomping that is performed tightly.

While The Beautifully Demolished perform well and have their sound down, they are lacking the spark to ignite the listener within these three songs — life is lacking from them, something a live performance can’t always rectify. With this three-song EP being discontinued as quickly as it was released (seemingly being erased from the Earth in the process) and a new record label gearing up to drop another EP by the band later this month, one can only guess how the future plays out for The Beautifully Demolished.