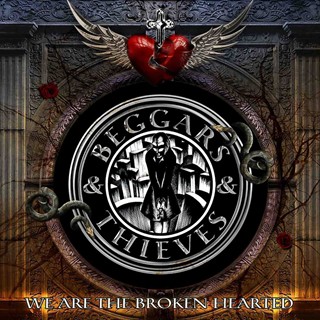 WE ARE THE BROKENHEARTED
Released November 29, 2011 (Frontiers Records)

Review:
In the world of hard rock, classy and intelligent are two words that are rarely used to describe the testosterone-driven genre. That is why bands such as Beggars & Thieves are such a breath of fresh air, as they have always delivered a more mature version of music that is typically filled with sex and drugs.


Beggars & Thieves made a name for themselves back in 1990 for having former Ozzy Osbourne bassist Phil Soussan as a member and the unforgettable single “No More Broken Dreams”, a slab of melodic rock perfection that millions of musicians wish they could have written. When the duo of Louie Merlino and Ronnie Mancuso returned last year with the limited-edition Stone Alone EP they proved that they were timeless, as the years away and changing musical trends had zero effect on them.

After that little teaser Beggars & Thieves have now truly returned, with their first new full-length since 1999 entitled We Are The Brokenhearted. One would expect it to be difficult to recreate the band’s early magic, but as the album’s opening track and first single “We Come Undone” shows they are up for the challenge. The song rivals “No More Broken Dreams” and “Beggars & Thieves” as the group’s greatest achievement with its majestic melodies and lush harmonies.

“Innocence” keeps the disc moving along nicely with a huge catchy chorus, a heavy sounding bottom end and a guitar solo that compliments the song perfectly. “Never Gonna See You Again” is a heartfelt mid-tempo number that sounds very powerful emotionally, you can almost feel Merlino‘s pain as he sings “never gonna see you again, still you’re gonna touch my heart.” “Seven Seconds” represents Beggars & Thieves at their heaviest, mainly due to the guitar riff supplied by Mancuso throughout — it makes for another killer track before “Walk Away” revisits the band’s trademark sound and melody. The rest of We Are The Brokenhearted continues to follow this proven formula, with “Midnight Blue” standing out as a highlight (and containing the album’s best fret-work).

For someone such as myself who enjoys hard rock music with ample amounts of attitude, Beggars & Thieves are a definite change of pace. Neither heavy nor abrasive, this band is (and always has been) the equivalent of a Grammy winning film in a field filled with ‘Deep Throat’ wannabes. If you ever wanted to convince stuck-up rock haters that there is more to the genre than sex, decadence and the devil… look no further than Beggars & Thieves.