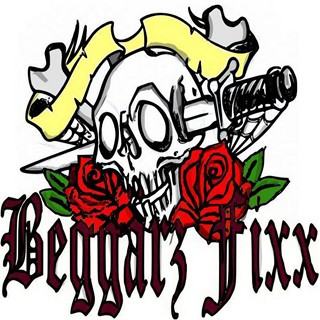 Review:
Remember the days when bands had to play years, and in extreme cases closer to a decade, before they were able to get their music out to the public? With the introduction of the internet those days, for better or worse, are long gone. Now a band can form and release music for the entire world to hear in the blink of an eye — UK glam/hard rockers Beggarz Fixx is an example of this phenomenon, forming mere months ago.

The biggest problem with these young upstarts is that they are so eager to have an album in their hands that they often overlook production values, song-writing abilities and many other attributes that come with experience. Thankfully Beggarz Fixx isn’t as amateurish as many, but don’t expect something as crisp and over-the-top as Def Leppard‘s Hysteria either. With a short but impressive two minute instrumental intro starting this EP off, all we’re really left with is three complete tracks, and to be honest they aren’t bad at all.

“Sold My Soul” is the best of the bunch with an opening riff not unlike something Ratt would dream up. It’s a sleazy little number that is only flawed by the out of tune backing vocals during the chorus, but I can hear a lot of potential on this track. “Outta’ Control” pretty much sticks to the blueprint established on the previous effort while “Gimme Some” wraps this little teaser of an album up with some cool guitar riffing wrapping around vocals that bounce between gruff and screaming.

For being together such a short amount of time, Beggarz Fixx play with a maturity (or as mature as sleazy music can get) well beyond their years. Sure this EP is rough around the edges, but it also shows a fair amount of promise. With a bit more time/experience, a few live shows, and a producer that is willing to iron out some of the minor flaws, Beggarz Fixx could be a band to keep your eyes on — that is if they have the patience to let everything fall into place. In the meantime Beggarz Fixx are offering all of these tracks as a free download at their Facebook page, so you have nothing to lose.