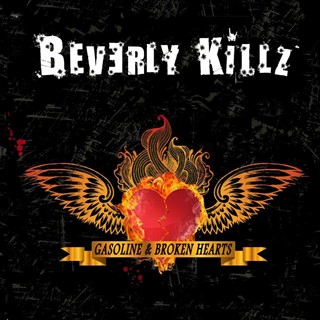 Review:
Beverly Killz are another band from Italy in the sleaze culture, this time claiming modern metal elements. I’d say that they do their genre of street rock pretty well, and while the album name may be a little cliche I do love it.

The vocals are the weakest part of Beverly Killz, but when frontman Vince puts passion first the songs really start to take off because the vocal edge is added and he no longer sounds so tentative. “Never Back Down” has a Crazy Lixx vibe to it while “Away From Danger” is more melodic, the guitar clean and the bass prominently in the driver’s seat, although a little simple playing-wise. It’s refreshing to hear an upcoming band that doesn’t feel the need to fill out the sound with constant noise — “Baby You’re On Target” and “Dark Lady” both have toned down parts complimented by heavier, fiercer choruses. The latter also has one of the better solos where guitarist Mak finally lets rip and the result is a spinning, screaming whirl of melodic metal.

Beverly Killz do have a tendency to fall into the trap of ‘what they’re comfortable with’ and keep playing it, so the songs blend together a little too much. “For Love” is worth listening to for the faster pace and darker tone and it’s one of the catchier songs on Gasoline & Broken Hearts. “Sin City” is punchier, a sort of melodic-metal touch to the chorused backing vocals while the cover of 90’s dance track “What Is Love” was a strange but creative choice in my opinion. It’s a great take on the track, though “In Sorrow” was one of the more competent originals and I think I’d have preferred it to end the disc.

If you enjoy this album you can check out Beverly Killz‘ 2010 EP ‘Straight From The Underground’ for further listening. Fans of bands such as Jettblack and Crazy Lixx should enjoy Gasoline & Broken Hearts.