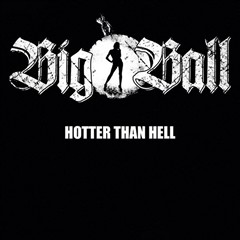 Production:
Produced by The Blood God.
Co-produced by Dennis Ward.

Review:
There really isn’t much to say about Big Ball, except that are yet another AC/DC clone — this time from Germany. As the group proclaims, “if you think AC/DC sucks you will hate us the same” — so if you are fed up with AC/DC copycats you probably won’t like Big Ball either. But to give these guys credit, they aren’t pretending to be anything they’re not so you know what you are in for from the start. Luckily for me I never tire of bands who take their inspiration from one of the greats.

Lead singer Thomas Gurrath‘s (ex-Debauchery) voice resembles Accept‘s Udo Dirkschneider and often sounds like a dead ringer for Brian Johnson, just a more aggressive and pissed off version — which is a good thing. Let’s face it, we don’t listen to this stuff for its literary genius, so while Hotter Than Hell can be rather repetitive lyrically, “Plugged In” is a great rocking tune with some cool lead guitar as is “Double Demon”, “Wrecking Ball” and “Big Ball Crew”.

There isn’t much point reviewing Hotter Than Hell track by track because, as you may guess by the cliched titles, the songs are pretty much the same old same old, with lyrics along the lines of a cruder AC/DC but with no real distinction between them. Therein lies the problem with Big Ball. It may seem contradictory for an AC/DC fan to say, but the ‘sameness’ on Hotter Than Hell starts to wear a little thin as one number rolls into the next and by the end of the disc it seems like I could have been listening to one continuous song.

While some people criticize the likes of Airbourne and Bullet for being too much like AC/DC, those bands still have a certain x-factor to set them apart, whether that is their obvious energy or songs… maybe both. While they may not be that original, they seem to breath a bit of life and passion into what they are doing. But Big Ball don’t have that special spark.

Sure, most AC/DC clones play paint by numbers music, which is fine by me, but Big Ball at times come across like they are reading off an uninspired script and are just going through the motions. Hotter Than Hell is no-frills no-surprises ballsy hard rock which they do more than competently. While I can’t call a band paying homage to AC/DC bad — and Big Ball aren’t bad at all — there is something missing, like the hunger or personality that should come through with this kind of music.

Big Ball would be well suited as an early era Brian Johnson AC/DC tribute act. Maybe their live show is a bit more exciting than they come across on record, and I wouldn’t mind checking that out.