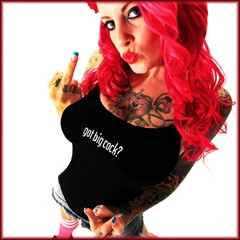 Review:
I was browsing the iTunes store when, lo and behold, I stumbled across a Big Cock album I didn’t have — Got Big Cock? — along with a complimentary Big Cock girl gracing the front cover. Of course iTunes would mark some of these songs as being explicit, but that’s for some of the words, not the actual message content, which doesn’t take a genius to figure out what’s going on.

Got Big Cock? is a digital only compilation of the band’s first three albums with two new tracks and a reworking of an old favorite, which I’ll get to later. If you don’t know who Big Cock is by now, there is little point in introducing them. So without any further delay, let’s see what the ‘hardest band in the land’ has picked for us as being their best.

A personal favorite of mine kicks things off, “Bad Motherfucker”, which is a straight-up statement from vocalist Robert Mason about Big Cock‘s attitude, and is also not so tongue-in-cheek about him — yes, he is the ‘BMF’. “Real Man” is another swaggering statement to the hordes of female fans regarding the bands sexual prowess and “Bump And Grind” keeps the swagger going — it doesn’t take much imagination to figure this one out. “Dirty Girl”, another straight-up rocking number is next… do you see the pattern here? Then “Get A Load Of Me” blares out of the speakers and is an absolutely outstanding classic rock anthem, complete with Mason screaming ‘Is this thing on?’ at the beginning. “Breaking My Balls” is a touching story about communication in relationships and following closely is “Ride On Me” — if you’re new to Big Cock then this is the song that sells the album, it is a fabulous number in every way possible.

Another personal favorite, and take this for what you will, is “M.I.L.F.” which proclaims the band’s love for all things woman. Check out Robert Mason‘s vocals on this song — wailing is the best way to describe it. Though catchy, “King Of Cool” just doesn’t grab me by the… well, balls, as some of the other numbers do. Another signature Big Cock song, the first single from the Motherload album, “Built For Speed” bursts through the speakers and is a song about racing… right? Then “Rock Hard” reinforces the imagery of the ‘hardest band in the land’ and is followed by “I Want It All”, a swaggering tale of ego in the land of rock n’ roll. The slow down number comes next, “Hard To Swallow”, and this one still kills me because it is simply awesome with the whole tongue-in-cheek, earnest way the band performs it. Big Cock then take off at a faster pace with the brilliant “Fucked Up”, a pounding and energetic tale of excess — the way of life for some. “Year Of The Cock” concludes the previously released material and is simply a statement of what the band planned on doing. You have been warned!

Now it’s time for the new songs! “Rock ‘N Roll-Aholic” is a straight-ahead formulaic Big Cock number, a chest-pounding, head-banging track with some spoken vocals from Mr. Mason who proclaims he is a ‘rock ‘n roll-aholic’, just like the rest of us. “She Loves Another Girl” is bit of filler and was probably a bit weak to actually make it onto the Motherload CD. The finale is a vocal/piano version of “Hard To Swallow” which simply showcases Mason‘s vocal prowess. It’s fascinating how taking away the guitars and simplifying the music creates such a powerful number. If the lyrics weren’t identical to the original you would believe it was serious number.

If this is your first foray into the world of David Henzerling, Robert Mason and company then you can’t really go wrong. Got Big Cock? contains the majority of the band’s best work, and as Danko Jones would say, if you’re an ‘Archivist’ then you had better pick this one up to reinforce your status as a professional music listener.