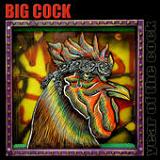 So what exactly is this Big Cock all about? Well, the band consists of Robert Mason (formerly of Lynch Mob, Cry Of Love and for a millisecond Ratt) and David Henzerling (who was better known as King Kobra‘s David Michael Philips) which means they sound like Lynch Mob with a sense of humor or King Kobra with a bigger set of balls (I suppose that’s only appropriate). Music such as this went out of style around 1992, but over a decade later it still sounds as great as ever.

Right from the opening track Big Cock reintroduces us to the excesses and perfection of 80s hard rock. Solos, hooks, rhythm, sex, fisticuffs, Year Of The Cock has ample amounts of each. They can play a song like “Bad Motherfucker” without sounding contrived and pull off the egotistical “King Of Cool”. Really there isn’t a bad song on this disc, you can safely throw the CD player on random and whatever three minute tune comes up would be a winner.

Big Cock also covers a couple of old King Kobra obscurities in “Mean Street Machine” and “Take It Off”, the later of which they completely nail (it may even be better then the original). And I have to say that I almost doubled over laughing at the lyrics to “Hard To Swallow”. At first listen it sounds like such a safe love song, but it is anything but – something a little more sinister is lurking underneath.

There is enough macho posturing on Year Of The Cock to set the feminist movement back years! While these guys may indeed have big cocks (I’ll let the female audience figure that out), they definitely have big hooks and big melodies and Mason‘s voice has just the right amount of grit to complement his natural ability. Year Of The Cock is without a doubt a fitting title, because this is one of the best releases of 2005. Get an earful of cock at www.bigcockrocks.com and www.cdbaby.com.