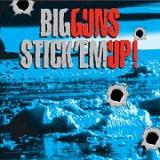 Review:
Every once in a while when I pick up a re-release I start to wonder why the hell that thing didn’t get released back in the day. One of Suncity’s newest releases, Big Guns‘ Stick’em Up, is one of those. Although there are only 6 tracks on here, this is an amazing release.

What first struck me was the crisp production value. This could easily have been a late 80s/early 90s major-production. The album kicks in with the catchy “Intelligent And Blind” and it only gets better from there on. The best song for me is the pure sing-a-long bliss of “Don’t Push”, this song could have been on every Little Angels record. This is in my eyes the perfect comparison, imagine Little Angels without the Elton John‘esque pomp and add some Danger Danger-catchiness and you get Big Guns.

Unfortunately the album ends much too soon with another killer, “One more River”, perhaps the most AOR-ish song. It is a real shame they didn’t manage to record the full-length record they had planned. Thanks to David at Suncity Records, the world at least gets to hear what could have been, if only…well we already heard that a 1000 times before, haven’t we?

As always the packaging is excellent and looks like a million bucks (well almost). Lyrics and a band-history make this a valuable addition for every fan of the above mentioned bands.