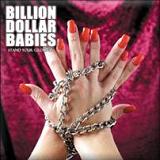 Review:
The Billion Dollar Babies are another new rock band from Sweden. Well, Sweden rocks, what can I say?

These guys really know how to play their instruments as the guitar solos deserve special mention. The vocals are good, although I don’t think that they always fit into the music, but all-in-all this band is very talented.

“Nineteen Nintie Four” is an awesome opener, a definitive stand out. “Restless Mind” is also a good rock song, although I can’t really point to anything in the song that is really amazing, I just find myself humming to it. Maybe it is the chorus, it’s a little slower than the rest of the song, but it actually works very well. “Stand Your Ground” is a hard rocker, a really great hard rocker. It has a short guitar solo, but it doesn’t really matter as the song rocks all the same. Finally, “We Don’t Live Forever” is a cool song reminding me a little of late 80’s / early 90’s Aerosmith.

Actually all the songs tend to have that Aerosmith feel to them, but you can feel other influences as well, like W.A.S.P. and AC/DC. The Stand Your Ground EP/single can be purchased at the band’s website or you can listen to each track at their myspace page.