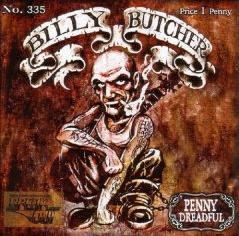 Review:
Billy Butcher‘s music style can be described as hard/blues rock. Although this is the band’s debut full-length release the members have had success in the past and present.

Pete Parker played guitar in Pretty Boy Floyd… no, not “THE” Pretty Boy Floyd from L.A., but a Canadian band of the same name. They released only one album called Bullets & Lipstik in 1989 before giving up their moniker to the L.A. band in an out of court settlement. They changed names, but disbanded a little later. Drummer Rick Fedyk has played in a few different bands as well and is still a current member of Vancouver’s King Karma.

Right from the outset Pete and the boys set the tone with “Stateside Walkin’ Shoes”. It’s more in the blues vein of things but it is an instant classic and will have you singing it for hours, if not days. “Blooze” is another track that stands out with great riffs and lyrics. It rivals any hard rock song you could put next to it…”I walked all night with my 44 in my hands”. Other standouts are “Seein’ Ghosts”, “Nothin’ On Me” and “Pain”.

So if you’re looking for something out of the cookie-cutter hard rock norm go get this CD, pick up a 24, have some friends over and kick the shit out of your ears.