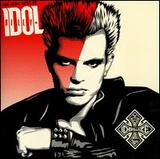 Review:
A lot of artists from the 80’s join the comeback-trip, and surprisingly in many cases they deliver an amazing record. Billy Idol has been around for some years now in his “second” career and what we’ve got with Idolize Yourself is yet another “Greatest Hits” collection.

In my case this is fine, as I am not familiar with his past work except for “Rebel Yell” and “White Wedding”. It is no surprise that these two tracks are represented on Idolize Yourself, aside all of his many hit singles. For those not familiar with Billy Idol like me, he started out mixing New Wave with hints of Punk Rock, eventually changing more and more into a real rocker with Charmed Life. Those rock songs are where he really shines as his distinctive voice fits perfectly to Steve Steven‘s (also known for his work in Jerusalem Slim and Atomic Playboys) great guitar riffs.

To my ears the second half of the disc is much stronger than the first half, probably because of the two stunning new tracks “John Wayne” (a ballad with sort of a U2 vibe) and “New Future Weapon” (a pure rocker), in which the latter especially is fantastic and in my opinion the best song on Idolize Yourself. Whether those two tracks along with the rare “Speed” are reason enough to get this disc (which as a special-edition comes with an accompanying DVD with all his video clips, complete with his trademark snarl/sneer) if you already own Idol‘s back catalogue I can’t say, but if you’re new to his music as I was this is recommended.

If you can imagine a punky mixture between The Ramones, Hanoi Rocks and 80’s pop-music then you can figure out what Billy Idol sounds like. Now get a whole new album done Billy!