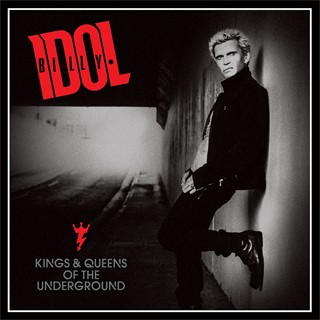 Review:
There are some acts who release new music at a steady pace while others do it less often, focusing on quality over quantity. Such would be the case with William Albert Broad — better known as Billy Idol.

Billy Idol was successful throughout the ’80s as the pop-punk rocker with an over-the-top image, a brilliant guitar player, and a steady string of hits. The ’90s however were not very rewarding for >b>Idol, not unlike several other great rock acts from the ’80s. Nevertheless he scored a terrific comeback in 2005 with one of my personal favorite rock records of the decade, Devil’s Playground. After that though, almost nothing was heard from Idol for almost a decade, apart from a best of compilation, a Christmas album and a few new songs scattered here and there. This didn’t mean the sneering singer had crawled under a rock — instead he and his band continued to tour relentlessly the entire time, but did not release much new material. The silence is now over, as Billy Idol has released a long awaited album (together with an autobiography) entitled Kings & Queens Of The Underground and finally the legendary singer’s loyal fanbase has some new music to feast upon.

How is the new music then? Kings & Queens Of The Underground is much different than the heavy and hard rocking Devil’s Playground. The songs on this album are much mellower, the production smoother, and the songwriting less dark and edgy than that found on its predecessor. The softer songs are really cool though, especially the very well written and semi-autobiographic title track with lyrics such as, “Sold all my vinyl, it went up my arm, and I thought rock ‘n’ roll couldn’t do me no harm” — which surprisingly sounds a lot different than the version released earlier this year. This does not mean that there are no good rock songs to be found on Kings & Queens Of The Underground — there is the very catchy opener “Bitter Pill” and the very Idol-esque “Postcards From The Past”, which bears some resemblance to his signature crowd pleaser “Rebel Yell”. Both songs however, as well as the rest of the new material really, have much more production polish than his rockers from a decade ago. The only real hellraiser here is the closing “Whiskey And Pills”, but again the album version in no way captures the raw sound and energy it receives when played live.

All in all this is a very good effort, recorded with a very good band — in particular killer guitar player and longtime collaborator Steve Stevens, who still shines. Even though, for me personally, this album is in no way close to his 2005 devilish masterpiece, I think a lot of his fans will dig it. It is not a hard rocking, borderline ‘Metal Idol’, but rather Idol‘s return to his pop-punk rock roots — making Kings & Queens Of The Underground a really nice comeback after almost a decade of practically no new music from Idol.