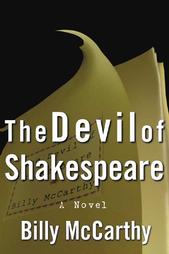 Review:
This single is only available with the purchase of Billy McCarthy‘s debut novel The Devil Of Shakespeare. While I haven’t had the time to read the novel as of yet, the author (formerly known as D’Molls drummer Billy Dior) has assembled a stellar cast for the accompanying CD single inspired by the novel.

With the music being written by Chip Z’Nuff, it comes as no surprise that this track sounds closer to Enuff Z’Nuff than the D’Molls. The song is based around a dreamy yet slightly dark mid-tempo melody. Former Warrant front man Jani Lane is hardly recognizable on vocals as he delivers an emotional performance, almost on the verge of losing control in several spots.

If the novel is as good as the song inspired by it, The Devil Of Shakespeare should be an interesting read. More information can be found at www.billymccarthy.com.

Buy The Book:
Purchase At Amazon.com
Purchase at eBay.com