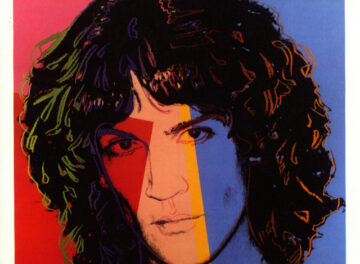 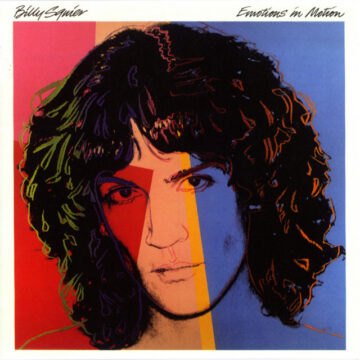 Review:
Despite Circus Magazine calling his previous band Piper‘s first record “the greatest debut album ever produced by a US rock band” and his 1980 solo debut Tale of The Tape containing a single with a drum beat so cool that it’s been sampled well over 300 times, rocker Billy Squier didn’t hit on mainstream success until 1981 with triple platinum sophomore release Don’t Say No and the following year’s double platinum Emotions In Motion. And while the world more than likely thought that the overplayed success of “The Stroke” from Don’t Say No was as loud as it could get for Billy, with “Everybody Wants You”, Squier turned his second single from Emotions In Motion into even more rock and pop culture fame. Enough to at least keep him afloat until he danced his way to supposed video shame in 1984 but anyway…

It has been reported that after the success of Don’t Say No, Squier purposely carried over certain elements in creating the songs that would eventually make up third solo release Emotions In Motion drawing connections between particular songs on the two records. Squier openly comments on those connections on his own website for anyone seeking further details but regardless of the inspirations, the bottom line is that like Squier‘s previous releases, Emotions In Motion is simply chock full of good, catchy, rock and roll tunes.

After 1982 single “The Stroke,” the second Emotions In Motion single “Everybody Wants You” is arguably Squier‘s biggest addition to 80’s pop culture. Like “The Stroke”, the tune found its way to not only the rock and pop music charts, but the song has been included in some fashion on the Queer Eye soundtrack, 2012 flick Battleship and TV show Burn Notice and was the entrance music for 80’s wrestling tag team The Fabulous Ones. To explain how catchy of a track this one is, on an album full of really good songs, “Everybody Wants You” kicks off the whole shebang pushing the title track to second on the album which is also saying a bunch. “Emotions In Motion” is a grooving little track itself. But as I’ve mentioned, this is a record full of really good tracks.

Over the years, what has made Squier‘s music so great for me is the time and place it’s landed. Sure listening back now, it still sounds energetic and uplifting but at the time, it almost seemed like the music was put out just for me. Or at least kids like me. His first band Piper was a cool listen in the later 70’s when I was eager to find as many new sounds as I could. His first solo album in 1980 helped light the first embers of me wanting to write my own catchy tunes and in 1981, hearing the songs from Don’t Say No on Atlanta radio as a displaced, lonely new arrival to the area presented me with a sort of imaginary musical friend.  Emotions In Motion played a similar role after moving again the start of summer 1982. Moving around the first 14 years of my life, the one thing I learned was that with music, there was always someone to turn to which I guess is why people value certain albums from start to finish more than others might. Some of you might read this and think “You’re crazy, there’s only a couple good tunes on that record” but in my head, I hear a year plus of musical memories which is cool, I’m sure flipped around some of you have a perfect album you love that I don’t have the same sort of connect with. It’s all subjective and most especially, it’s all personal and in many cases, magic.

Bolstered by solid support of radio at the time, Emotions In Motion delivered Squier to the Top Five of the Billboard album charts for the second straight time thanks not only to regular singles spins but also strong radio play of deeper cuts like “Keep Me Satisfied” and “Learn How To Live,” a moral compass of an anthem with edgy verses and hook chorus while “Keep Me Satisfied” more than likely drew play due to it’s boogie woogie groove. According to Squier, it stands as the “Too Daze Gone” track for Emotions In Motion while “Learn How To Live” is supposedly the answer to “My Kinda Lover” and in this parallel two-album universe, seems that catchy semi-ballad “In Your Eyes” (which bridges the sequence gap between the two) is what Billy thought of when looking to create a song similar to Don’t Say No track “Nobody Knows.” In reality nobody does know other than Squier but regardless, “In Your Eyes” is just as melodic and captivating a track as any ballad-style Squier tune and fits well with “Keep Me Satisfied” and “Learn How To Live,” both drenched in Squier‘s straight forward rock and roll style and released as singles outside of the US.

While Don’t Say No has since day one been a favorite record of mine, I have to admit that as a whole, follow up Emotions In Motion is perhaps an overall stronger album. Where that first one is loaded with several stellar tracks surrounded by some cool solid songs, Emotions In Motion follows a first side made up of top notch tunes with a flip side of nearly as many great ones. Billy even kinda tells you just that by starting the flip side out with “It Keeps You Rockin’” which is the little brother it seems to Don’t Say No side two opener “Lonely Is The Night.” Yeah, Billy didn’t even make it hard with that one but once again, another stop and go slammer of a track that, while obviously similar, rocks balls on its own.

“One Good Woman” adds the signature funky groove rock Billy tune to the mix in a way very much like the groovy title track making for a cool lead up to third US album single “She’s A Runner.” Released in early 1983, it landed at a time when rock and pop were overfilled with catchy pop tunes frosted in edgy rock toppings. As infectious as any song, nevermind a Billy Squier one, it easily could have been THE pop track from the album had it been sent to radio earlier or perhaps even a little closer to summer time 1983. It kinda reeks that whole 80’s summer break mall vibe. Had it been released as the record first single, who knows?

Down the stretch, Emotions In Motion continues in bluesy-Zeppelin influenced classic Squier fashion with super cool tune “Catch 22” laying down an old-school groove that fans of everyone from Foghat to just about any 80’s guitar male rocker can get on board with. It’s edgy and catchy yet somehow still sexy and while it’s not rocket science, is decisively Billy Squier and that’s not even close to a bad thing. Even closer “Listen To The Heartbeat” won’t be confused with being anyone else’s tune even if loaded with every influence that Squier wears on his Telecaster. Then again, even Billy has never claimed to be anything short of the sum of his influences.

Much like Squier‘s records before and after, Emotions In Motion is way more of just a good rock and roll album than any sort of out of this world, original, groundbreaking masterpiece and at the end of the day, that’s cool. Some of the best records ever have been ones built on the strength of good catchy tunes while history has shown that the most technical of musical releases tend to fall short of commercial success. No one will ever confuse a band like say, Poison, with the more musically prolific bands of rock and roll like Rush, but man, they sure as shit are fun! Crowds of rock fans singing along will attest to that fact time after time after rock and roll time and Billy Squier fits right into that space. In rock and roll, there’s a place for everyone and for fans of good time rock and roll that can carry you back in good time, it’s tough to beat this kind of music. The kind that lifts and makes us all want to be in the middle of the high of an audience again. Engulfed in the sights and sounds of good old rock and roll filled to the brim with emotions in motion.

Billy Squier‘s “Everybody Wants You” video: