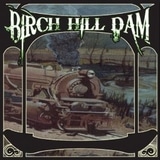 Review:
This sled-titled debut album from Birch Hill Dam is an interesting piece of metal. The first song, “Bed of Nails”, is a throwback to metal of the early ’90s but with a 21st century twist.

Not everything on the record however is a winner, “Seeding” doesn’t really go anywhere and sounds like an Alter Bridge outtake. “Gasoline Fiend” is an interesting song with pounding drums, thrashing guitars and good, strong vocals.

One of the best songs on the record, “Boozehound”, is loud and heavy with the right amount of attitude in the vocals. Unfortunately, not every song reaches the same level, as “Kilimanjaro” falls flat on its face while “Thunderous Malone” struggles to reach a level of comfort, but never quite gets there.

“Soul Giver” sounds a bit like latter-day Corrosion Of Conformity, which is incredibly interesting as one would not expect to find that sort of influence in a band like Birch Hill Dam. The biggest standout on the record is “Green Machine,” originally a Kyuss track, which finds the band in the right groove and it’s something they don’t want to let go of.

Ultimately, this is a band that’s trying many different things and succeeds at most of them; one of the coolest metal records of last year.