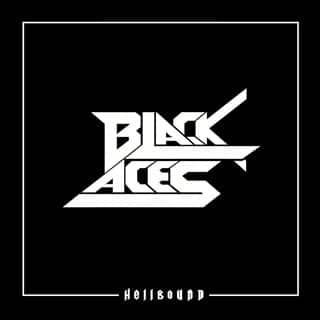 Review:
I know many people get tired of bands rehashing the sound made famous by AC/DC, but personally I can’t escape the intensity of such groups. The latest member on the scene, the Black Aces, unsurprisingly also hail from Australia and have the three chord attack down pat throughout their debut EP.

What sets the Black Aces apart from the countless others strutting their stuff around the world is frontman Tyler Kinder. He often has a very shrill vocal delivery, and if you didn’t know better one might assume a female was fronting this Aussie upstart. Even though he can occasionally be completely over-the-top and a little hard to take there is no denying his enthusiasm, and I give him credit for that. The opening “Ain’t Got A Heart To Break” is three minutes of fist-pumping hard rock being forced upon you at a record setting pace and is undeniably the band’s shining moment. The following two tracks work well enough musically, but find Kinder overreaching and in the process can rub you the wrong way. Thankfully the rest of this short album picks up where the opener left off for a killer slab of AC/DC influenced metal. “Devil Woman” slows things down ever so slightly before the group kick into overdrive during “Drinkin’ You”, the Airbourne influenced (not the only one either) “Soulstealer” and the straight-forward “Hard Luck”.

Hellbound doesn’t offer much in the way of originality, but they more than makes up for it in ball-busting rock delivered with a ferocity few groups can muster. As a listener, just by reading this review you’ll know if the Black Aces will appeal to you — because there are fans like myself who eat this stuff up. I don’t think the Black Aces will ever overtake Airbourne, simply because they are rougher around the edges, but they would make the perfect openers for their fellow countrymen. No ballads, no compromise and a singer that sometimes sounds and squeals like a woman… what more could you ask for?