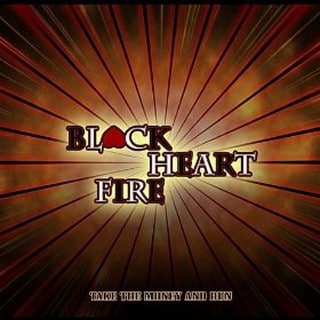 Review:
Take The Money And Run is the debut EP from Glasgow based rockers Black Heart Fire. It’s a compact set of four tunes chosen to showcase the band — and just may end up being the only songs the band ever releases!

Up first is “Take It” which doesn’t grab you up close and personal on the first impression, but that is up until the lovely change of pace and energy as the song moves into the middle part before leading into the guitar solo. The ending of “Take It” is a high energy guitar closer that leads straight into “Night On The Town” — and what a tune it is. It is a fabulously dirty little head-banger that’s catchy and contains a lovely guitar piece that’s driven along to a great solo. “Night On The Town” is one of those songs that have a certain spark that makes a good number great. “Black Hawk” follows and is another energetic riff-laden gem. Wrapping up Take The Money And Run is “What You Want Me To Be”, an ambitious statement about the world today. However this song misses the mark from me personally — despite some good guitar work, its sound is too big for this EP and doesn’t mesh with the rest of the tracks — as its more serious, slower and a big drop down in tempo from “Black Hawk”.

“Night On The Town” is worth the money alone, and with some good other numbers added the EP is worth your time, so do yourself a favor and buy it. Take The Money And Run is a good first effort from Black Heart Fire — and it may be their last as they played their ‘farewell’ gig on May 13th of this year.