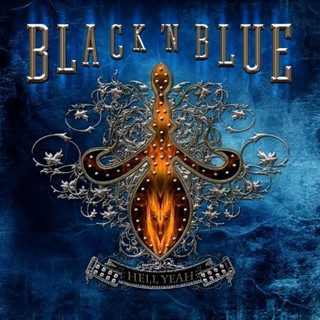 Review:
Black ‘N Blue are hard rock legends in their hometown of Portland, Oregon, even being inducted into the Oregon Music Hall of Fame in 2010. The guys moved to L.A. in the midst of the ’80s glam rock invasion and they fit in well. They caught the attention of David Geffen, were signed to his imprint, and had big name producers manning the soundboard on the studio albums that included Dieter Dirks (Scorpions, Twisted Sister and Accept), Gene Simmons (of KISS), Jonathan Cain (of Journey) and Bruce Fairbairn (Bon Jovi, Aerosmith, KISS and AC/DC). It’s baffling why Black ‘N Blue didn’t become a household name back in the day because they had a major label support, top-notch producers, toured extensively, and had great material on those four Geffen releases.

In 2010, Black ‘N Blue reconvened after a lengthy hiatus. The band has reformed various times throughout the years and played some special hometown gigs or special U.S. festivals. Prior to that, singer Jaime St. James spent a few years fronting Warrant, and that pairing spawned the album Born Again which wasn’t that well received while drummer Pete Holmes kept busy touring with Michael Schenker and Malice. Guitarist Tommy Thayer, who spent years as member of the KISS touring staff, eventually stepped into the ‘Space Ace’ character vacated by Ace Frehley in 2002 and ended up recording Sonic Boom with the band and continues to tour extensively. Stepping in for Thayer in Black ‘N Blue this time around is guitarist Shawn Sonnenschein, a close friend of the band.

This brings us to the band’s new studio album Hell Yeah!, the follow-up to 1988’s In Heat. I imagine Black ‘N Blue‘s goal behind the long-awaited Hell Yeah! is to release an album as a reason to hit the road, rather than touring to promote the album. I say this is because from the mediocre opening track “Monkey”, you sense that something is very wrong — there isn’t a catchy hook, there’s no memorable riff, the production is muddy and the song just isn’t there. Hell Yeah! doesn’t get much better either. The only saving grace is that St. James‘ voice has held up. While the band deliver some great gang vocals, and there are a couple of standout tracks that are a throw back to their glory days in “Target”, “Hell Yeah!” and “Candy”, that’s not to say that these are on par with classics like “Twelve O’Clock High”, “Wicked Bitch” or “Great Guns of Fire”.

Hell Yeah! leads you to the conclusion that Tommy Thayer‘s absence is greatly missed on this album — and this isn’t the comeback that longtime fans envisioned.