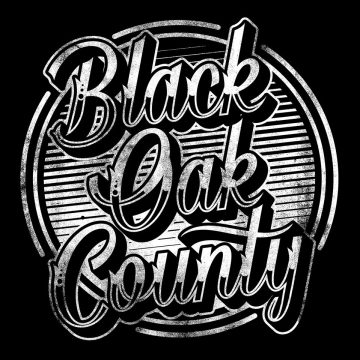 Review:
Black Oak County are a band out of Esbjerg, Denmark. They are a quartet of young guys who have been playing previously under the name Great White Buffalo, but chose the name change after some “legal issues.” Listing influences such as Slash and Zakk Wylde, they go after a modern rock sound in the vein of (hard rock) Nickelback, the UK’s Stone Broken, or fellow countrymen Volbeat.  In my opinion, they do it better and with more enthusiasm and creativity than any of those aforementioned bands. Recorded at Hansen Studios, which is owned by renowned producer Jacob Hansen (Volbeat, Amaranthe, Pretty Maids), the band teamed up with producer and engineer, Jonas Haagensen, in order to capture their tour-tested songs and the energy of their energetic live performance onto an album.

I have to admit, I have not been able to get this record off my stereo since I got it a week ago. The entire ten tracks kick ass. It got to the point where I needed to know more, so I reached out to guitarist Jack Svendsen for more information. As for the band name, Jack told me, “We’re from the town of Esbjerg, Denmark, and the county crest is a big, white oak tree. We’d like to think Black Oak County represents the shadowy side to the place we’re from.”

Did I mention this album kicks ass? The lead off track “Someone Else” leaves little doubt about what the listener is in for. A massive driving bass drum pounds the beat into your head until you can’t wait for the song to explode. The vocals are aggressive and angry, at times reminding me of Pantera’s Phil Anselmo, circa Cowboys From Hell. I can only wish this song were available for general preview.

“Enough On My Plate” is more hard rock, and highlights the vocals of Niels Beier and the band’s ability to create a catchy chorus with a hook to it, which is reminiscent of Nickelback’s Silver Side Up album. “Bogeyman” gets ugly fast and pounds away as a real hard rocker. It may not be the most original track, but it has its upsides such as a creative bridge and lead in, for example.

The first release from the album is “Mad Dog.” Much like “Someone Else”, it delivers a punch from the outset, and doesn’t stop hitting until the final note. Check out the video below, and if that’s your thing, then the whole album is yours! “Save Me” is a little slower and has a neat bass groove and a cool guitar line. It is very Black Stone Cherry. In fact, when I asked Jack Svendsen about that connection, he said, “One day, Niels came into our rehearsal space, and told the band about an album called ‘Between The Devil & The Deep Blue Sea’ by the band Black Stone Cherry. We all went home and listened to that album, and it completely changed the way we were as a band, and the music that we play!”

“Rated R for Redneck” is a special kind of tune. It’s heavy, grungy, and ugly. Jack compared some of the people in his hometown to the stereotypes found in the United States… essentially “…being sick of where you’re from, surrounded by people you can’t stand.”  “Laughing With The Crows” has an interesting lyric, and more driving guitars. I could take a quick pass on the requisite ballad “If You Only Knew.” It’s radio friendly, which doesn’t make it bad, but just reminiscent of other bands doing similar things. “Nothing To Say” is ok, but after the strength of the previous tracks, just seems like a bit of filler. Black Oak County redeem themselves with the final song “Never Cared” which has a nasty bit of lyric combined with heavy guitar work.

Unfortunately, either because of the production mix or a hint of the singer’s accent, I have a hard time discerning the vocals on most of the tracks. That’s too bad because what I can pick up seems really interesting. Black Oak County have provided a killer modern rock album that drives into your head and stays there like a bad infection. The more I listen, the more I want to hear it again. Thanks to Jack Svendsen and the rest of Black Oak County for their time and for a great chat!

“Mad Dog” is taken from the upcoming debut album to be released on Mighty Music/Target Group worldwide early 2017. Filmed by J. Ravn Photography and Black Oa…