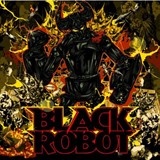 Review:
What happens when you take three former Buckcherry members and put them together once again? In the case of Black Robot the results are rather surprising.

Black Robot is the creation of Jonathan “JB” Brightman, who was one of the founding members of Buckcherry. Along with Detroit city singer Huck Johns, the pair founded Black Robot before bringing Buckcherry alumni Devon Glenn and Yogi along for the ride. This album was originally released independently in 2009, but is about to be reissued with two bonus tracks featuring a different line-up.

Of course the obvious thing to do with this band would be to be to clone the Buckcherry sound and go in that direction. That isn’t exactly the vision that Brightman and Johns had in mind for Black Robot however. Aside from the opener “Badass”, their arrangement of the J.J. Cale penned and Eric Clapton classic “Cocaine” (what is it with these guys and cocaine anyway?) and “Girls Kissing Girls” which includes some AC/DC influenced power riffage, that’s where the Buckcherry similarities end. Black Robot is much more eclectic, and they step outside of the box throughout their self titled debut effort. Their sound is part garage band, part punk, part glam, part alternative and part straight forward rock ‘n’ roll with a 70’s feel to it. The music is explosive, memorable, soulful, bursting with attitude and full of piss and vinegar. If you’re looking for the next big thing in rock ‘n’ roll then Black Robot are it.

The only thing that would have made this album even stronger is if it had been scaled down from 13 tracks to a solid 10. The production is king, the musicianship and the songs are there in spades and the attitude is off the hook. Look for Black Robot, with their revitalized line-up of Johns, Brightman, Andy Andersson (guitar), Staffan Osterlind (guitar) and Possum Hill (drums), to explode in 2010.