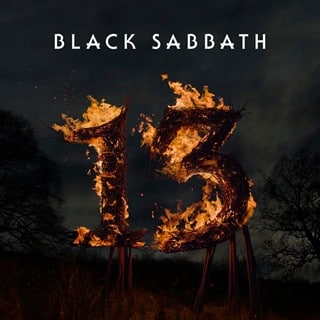 Review:
So it all kicked off in 1978. Black Sabbath‘s eighth studio album, Never Say Die!, was met with much apathy by fans and critics alike and meanwhile they fired singer Ozzy Osbourne, who went on to lead a successful solo career, for excessive substance abuse. With more line-up changes than Spinal Tap, guitarist Tony Iommi kept Black Sabbath alive until 1995. The band eventually built bridges with the ‘Ozzman’ in 1997 when they reunited for Ozzfest and later a handful of studio sessions with producer Rick Rubin, but no new material came of it. Osbourne needed to finish work on his solo album and soon after MTV’s The Osbournes quickly became a hit series phenomenon and the band went on hiatus…

Almost thirteen years on however, it’s finally here! Over four decades have elapsed since a new album from Black Sabbath felt like a significant cultural event. But 43 years on, they’ve not only made a new record, but they’ve scored a number one with it spanning 50 countries across the globe, including the US and UK. Ozzy has stated multiple times that 13 could possibly be the most important album of his career, and with that prediction he wasn’t far off. The build up to 13 turned it into one of the most anticipated metal albums of the 21st century, but it almost didn’t happen — the premature departure of drummer Bill Ward over a contractual spat and Iommi‘s cancer diagnosis brought one of the world’s greatest rock bands to an abrupt halt. Cancer, however, didn’t stop Iommi and instead of throwing in the towel, Black Sabbath channeled all that darkness into arguably one of their finest works to date.

‘Rewind the future to the past,’ instructs Osbourne on the opener “End Of The Beginning”. Squinting back down the highway to their doom-metal prime, Black Sabbath delivers something that practically demands for rock to return to a back-to-basics approach. With the use of little to no technology, while recording straight from analog, with just enough polish to shine, Rick Rubin proves to be a shrewd choice of producer here.

Scientific symbolism, religious ramblings, death and a forlorn of all hope — lyrically, nothing has changed, as showcased on one of their heaviest and haunting cuts to date, “God Is Dead?” — ‘Blood on my conscience and murder in mind, out of the gloom I rise up from my tomb into impending doom. Now my body is my shrine’… For 13 the proof is in the pudding and contains all the melancholy ingredients that once completed the recipes of their first six albums together. What sets Black Sabbath apart from their contemporaries is that they play as if possessed with a biblical fervour. Treading the turf of doom-laden territory once again, they find a groove and lock into it for an entire album, like on the trudging “Age Of Reason”. Iommi takes the reins with this one — his rich, moody melodies are plentiful of that signature ‘Sabbath’ sound that we all know and love.

“Damaged Soul” glides along to a bluesy rhythm and with Rage Against The Machine‘s Brad Wilk on stick duties, his drumming qualities espouse well with bassist Geezer Butler‘s superb bass tones and he does a cracking job of stepping in for Ward, who is sadly missed on this chart topping gem of an album. Resurrecting riffs from one of the more psychedelic places of their career, ballad “Zeitgeist” worships at the altar of Paranoid‘s Planet Caravan with Middle-Eastern percussion, wind instruments and a distorted filter placed over Ozzy‘s voice — it is essentially part deux. Groovy licks are thrown in for good measure on “Pariah” and contrary to its title, “Loner” results in one of the more lively sides to 13.

Haunting melodies and riffs of grandiose conclude this doomy and gloomy, ear-bashing album, with a welcome blast of rousing optimism. Ultimately, 13 is the album Black Sabbath were destined to make, revealing itself as a summing-up and surpassing of their career to date. Given its commercial success, 13 might have become their most prolific work to the masses, however to the millions of fans belonging to their hardcore base it won’t have been their best. But for a record almost thirteen years in the making, 13 really was worth the wait. All hail the mighty Black Sabbath and here’s hoping for another.

Review:
If there is one CD that has received more hype, drama and interest leading up to its release, it has to be Black Sabbath‘s latest CD 13 — the band’s first release in 35 years with the ever crazy but loveable Ozzy Osbourne. Having been named one of the most influential bands in the history of rock ‘n’ roll and the founders of the heavy metal genre by numerous heavy metal legends including Rob Halford of Judas Priest, all eyes were on Black Sabbath to see whether they could live up to their legend and back catalog of amazing doom and gloom heavy music.

The interest/drama started about thirteen years ago when rumors started circulating that the original members were getting together to record a new album. That never really materialized, instead Osbourne released a few more solo CDs while guitarist Tony Iommi and bassist Geezer Butler joined forces with singer Ronnie James Dio and drummer Vinny Appice to form Heaven & Hell. The foursome had a good run until Dio passed away, and in the meantime Iommi and Osbourne were in a legal battle over the Black Sabbath name. Shortly after the band name dispute was put to rest, and the four original members were finally ready to record their first album together in over 30 years, Iommi was diagnosed with early stages of lymphoma. Would Iommi succumb to cancer? Would the much anticipated new CD from Black Sabbath ever get recorded?

The drama continued with original drummer Bill Ward — although this is not surprising given how many times he has been in and out of the band since 1969. At first Ward was to be part of reformed Black Sabbath line-up, but by early 2012 he announced that he would not participate in the reunion unless he was given a “signable” contract (he must have wanted more money). Sadly, Ward and his fellow original bandmates were never able to patch things up, despite what appeared to be many olive branches offered to the drummer on numerous occasions. I do not know how much money Ward would have made with his “unsignable” contract, but judging by the reaction to 13 and the subsequent tour dates selling out just about everywhere, he would have made bucket loads of cash! Back to the drama — it seemed that drummer Tommy Clufetos (from Osbourne‘s solo band) got the nod to replace Ward, however by early 2013 it was announced that Rage Against The Machine and Audioslave drummer Brad Wilk would be the new man. Getting back to Ward — does anyone really care now if the new album doesn’t include him? Judging from the results on 13, I would say not.

13 kicks off — predictably — with a heavy doom and gloom riff on the opening track “End Of The Beginning”, before slowing down and Osbourne’s familiar and incomparable voice greets the listener. The song slowly picks up before launching into an infectious groove that only Geezer Butler and Iommi can truly deliver. Butler‘s bass playing can be well heard throughout “End Of The Beginning” and Osbourne‘s tribute in the CD’s booklet that Butler is “The World’s Best Bass Player” may just have a ring of truth. Clocking at just over eight minutes, “End Of The Beginning” is a good song but will never ever be considered one of the classics. Next up is the controversially named “God Is Dead?”. Credit has to go to Black Sabbath to tackle what many might consider to be a taboo subject, but the lyrics really do not shed that much light on what the song is exactly saying. The first chorus states in part ‘Is God alive or is God dead?’, while the following choruses say ‘I don’t believe that God is dead. God is dead’. I must say that I feel quite uncomfortable with the song title due to my Christian beliefs, but let’s put aside whatever message the song is trying to convey — overall “God Is Dead?” is bloody good and kudos to Black Sabbath for releasing it as the first single even though it clocks over eight minutes long! “Loner” follows and is one of 13‘s most simple songs but also one of its best — it is built on one solid guitar riff and the song would surely sound fantastic in a live setting.

Unfortunately, after the CD’s first three songs, 13 takes a turn for the worse. “Zeitgeist” is a dull one — it is very slow and has no business being included on the album. At the end of that song Osbourne sings ‘Goodnight’ and that is exactly what I have been doing while listening to “Zeitgeist”. “Age Of Reason” sounds pretty good (and wakes you up) simply because it is following the album’s worst track. Iommi‘s solos at the end of the song are quite enjoyable and prove that you do not need to play 800 notes a minute to create a good solo. “Live Forever” has the infectious grooves and riffs that you would expect from a good Sabbath song, sadly 13 takes a turn for the worse again with “Damaged Soul”, a slow uninspired tune and the closing “Dear Father” is not that much better. What Black Sabbath should have done is take the three bonus tracks from the Deluxe Edition of 13 and include those in the regular CD version rather than “Zeitgeist”, “Damaged Soul” and “Dear Father”. The three bonus tracks, “Methademic”, “Peace Of Mind” and “Pariah”, are some of the fastest and best songs that Black Sabbath has to offer on 13 — someone must have put those three as the bonus tracks by mistake!

One nice touch, contained in the CD booklet, is that Iommi and Butler appear to be extending an olive branch to Bill Ward to put everything behind them. Butler gives “special thanks to brother Bill Ward” while Iommi in turn gives “special thanks to the Sabbath family” which includes Ward (but also oddly the wives of Osbourne and Butler). Most telling is that drummer Brad Wilk is only listed as a “special guest musician”. It certainly appears that the door is wide open for Ward to reclaim his spot as Black Sabbath‘s drummer.

At the end of the day, Black Sabbath‘s 13 fits nicely alongside the ’70s era Osbourne fronted Black Sabbath releases but does not measure up to the band’s greatest albums — including their self-titled debut. Nevertheless, Black Sabbath has proved with 13 that they still have a lot of game and cemented why the band is widely recognized as the founders of the heavy metal genre. Putting aside that all heavy metal followers should purchase 13 just out of respect for what Osbourne, Iommi and Butler have accomplished and contributed to the genre, I recommend that you pick up this album simply because it is a good CD. However, do yourself a favor and pick up a copy of 13 with the bonus tracks — or else you will be missing out on three of the album’s best songs.