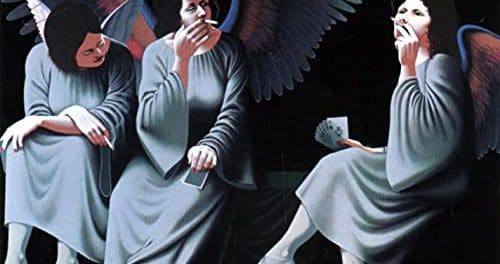 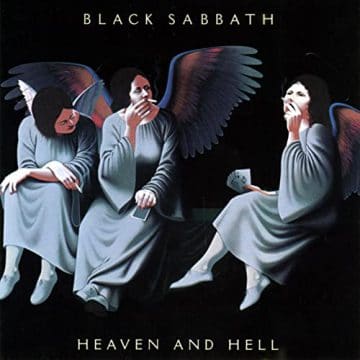 Review by John Stoney Cannon:
Many a loyal Black Sabbath fan has chastised me for my rather loud (and over the years often repeated) declaration that Heaven And Hell is by far my all-time favorite Black Sabbath album. Of course just as loudly, I’ll be the first to admit that without the songs of classic Sabbath, heavy metal would have never been the same possibly leaving my ears devoid of personal favorites like Judas Priest, Iron Maiden, Saxon, and others. Don’t get me wrong, my rock and roll youth was of course pierced by tracks like “Paranoid”, “War Pigs” and the like but by the time I finally saw Sabbath live they were hardly impressive, especially after a very young Van Halen blistered the stage as their opening act.

And yes, to this day I absolutely adore those early Ozzy-fronted Sabbath albums, but for me the 1970’s was a madly colorful musical kaleidoscope of rock and roll with every turn introducing something different. Within a visual sound landscape of acts like David Bowie, KISS, Ted Nugent, Queen, and of course Van Halen, Black Sabbath circa 1978 was like watching cement dry – cold and still. Yeah, the songs were still there but the delivery for a hyper kid like me was like someone had warped the record. Something was off, and my response was merely a shrug. Not that Sabbath songs didn’t continue to penetrate my musical landscape after all, by then you couldn’t attend an arena rock show or festival in Europe with at least a blast of “Iron Man” or “Paranoid” being cranked between bands.

On the flipside, as a long-time fan of Deep Purple and even more so, Rainbow, I had to that point grown up with my preferred hard rock injected with beautiful melodies, in some cases classical melodies. It was this beauty and the beast blend of sounds that would at the time pull me towards bands like Judas Priest, Scorpions, early Krokus, and eventually Def Leppard, Vandenberg, and so on. But by 1980, due to fave Rainbow songs like “Man On The Silver Mountain”, “Starstruck”, “Rainbow Eyes”, and “Long Live Rock ‘N’ Roll”, I was already a full-blown fan of Ronnie James Dio‘s vocals and lyrical style so when I heard rumblings that he had possibly joined Sabbath, I was more than just mildly curious. Of course, it also didn’t hurt that I still carried around a bit of a cartoonish affection for science fiction and fantasy fare. Subjects that fit nearly perfectly within Dio‘s rock and roll wheelhouse. At that time, tales of magic were far more relatable to my Saturday morning cartoon self than lyrics based on alcohol, trips, and any sort of “Sweet Leaf.”

Listening back to that era Sabbath now only confirms my opinions to myself. After revisits to previous Sabbath albums Technical Ecstasy (1976) and Never Say Die (1978), the band’s first release with Dio on the mic tears out of the gates with an energy not seen from Sabbath in several years. Right off the bat opener “Neon Knights” returns metal’s forefathers to a darker foundation that briefly gave way to flirtations with fits of pop, prog, and odd harmony. While the classic Dio ingredients of melody and hooks are firmly in place, they are presented in fashions more akin to melodic metal than the arena rock Sabbath was starting to lean towards. The prototype “metal gallop” on tracks like “Neon Knights” would predict a metal future to come via bands like Bruce Dickinson era Iron Maiden and ultimately Metallica. And, all of that could merely be heard in track one. Yes this was indeed a different Black Sabbath but a stronger, heavier, faster, more together but for the better Sabbath. A fact that would not be lost on their former frontman (or future wife Sharon depending on who you ask) as within a year, Ozzy would also grab hold of a new, powerful, serious sound en route to becoming arguably the most popular heavy metal artist of the eighties. But that’s a whole other Blizzard all together.

If ever there was a sign of metal to come, “Children of The Sea” could easily lay claim to being that sign. Soft yet dark opening, brief pause, then grinding blast into fantasy poetry set for a sea of synchronized headbanging. Early metal songs as such offering up permission for even the heaviest acts like Metallica and Maiden to interject brief baiting moments meant to relax before grabbing the listener by the throat and melting face. Yes, the trick was not new to Dio (having done so aplenty in Rainbow) but surrounded by the likes of Tony Iommi, Geezer Butler and Bill Ward, this melodic metal form fires off in an entirely more bombastic way. Metal and melody wrapped around vocals that growl as much as they soar. To this day, few metal vocalists have been so blessed with such a blend of power, grit, personality, and dare I say it, soul. It’s been said that while Ozzy would vocalize to the riff, Ronnie James Dio would embellish it with vocal riffs and melody of his own. Even now as I blast this album, while I reflect and write, “Children of The Sea” remains my personal favorite track on this favorite of Sabbath albums and it only just begins the stamping of Dio‘s metal print over part of the Sabbath legend.

Continuing with the hard rocking boogie of “Lady Evil”, it doesn’t escape me a bit how silly a few critical fans must have felt a few years later when gravitating towards Dio‘s first couple of solo albums. Over the years, I’ve often wondered how many fans who booed Dio or yelled for Ozzy back in 1980 eventually also became die-hard fans of albums Holy Diver, and The Last In Line. But as much as it’s obvious that Dio made a mark on Black Sabbath (just a brief poke at most post Dio Sabbath albums offer signs of such) it could easily be said that his time in Sabbath had a profound effect in return as Dio the band rolled a good bit heavier than the singer’s pre-Sabbath efforts.

Within tracks like “Walk Away” and “Lonely Is The Word”, both Sabbath‘s and their then new singer’s past pop up in classic early blues hard rock fashion ala Deep Purple, Rainbow, and in some ways, even early Sabbath. “Walk Away” in particular, with it’s classic rock lead guitar work, stands as perhaps Heaven And Hell’s most direct link to early blues hard rock if not for the fact that “Lonely Is The Word” leans more to the straight up blues rock attributed to earlier bands like Free.

Looking forward, “Lady Evil” and “Wishing Well” perhaps offer the largest glimpse of Dio‘s future both being filled with ingredients that would eventually carry Dio and the many carnations of his self-named band into stuff of heavy metal legend. If any direct connections can be made sound-wise to Holy Diver and Last In Line, it can be heard throughout these two great tunes. But that is not to say that Heaven And Hell is simply a Dio band album in disguise.

From top to bottom, it wouldn’t be too difficult to think that Dio was in on the writing of the tracks on Heaven And Hell from the jump but surprisingly many of the songs were originally born out of writing sessions with Osbourne, including (shockingly) “Children of The Sea” which started life with an entirely different lyric and melody supposedly. While the marriage between Sabbath and their new frontman can be heard, in reality the foundation of Heaven And Hell lies with the three original Sabbath members, most particularly Iommi. That foundation (and sound going forward) can be most heard in the crushing title track and the record’s second single, “Die Young”, a tune that oddly enough starts off with an organ sound not too far removed from what former singer Osbourne would use going forward on “Mr. Crowley.”

So yeah, it was 1980 and for a brief moment bands like Sabbath were considered dinosaurs. In reality, at the time if they had become extinct and faded away chances are, few would have noticed leaving them to become legendary forefathers of heavy metal born of a time filled with legends. Instead, with a new singer branded with a name (and voice) straight from the heavens, Black Sabbath conspired with Heaven And Hell to reinvigorate themselves AND hard rock.

Review by John Lewis:
The word ‘classic’ is probably used too liberally to describe records, but I am going to confidently apply it to this 1980 release from Black Sabbath. It was also very much a comeback album, as the band had been floundering and directionless following its last two releases with Ozzy — Technical Ecstasy and Never Say Die.

In 1979, Black Sabbath were looking for a vocalist after Ozzy’s departure while singer Ronnie James Dio was looking for a band after departing from Rainbow (his last recording with that band was the excellent Long Live Rock & Roll). Strangely, Dio was introduced to Sabbath by Sharon Arden, later, of course, to become Mrs. Ozzy Osbourne. Behind the scenes, the band was battling various issues such as drummer Bill Ward and bassist Geezer Butler not always participating in the pre-release demo recordings. However, this is not at all apparent in the finished product (beautifully produced by go-to metal producer Martin Birch), which presents a streamlined and focussed Black Sabbath fronted by one of the all-time vocal greats.

Let’s look at the track listing. “Neon Knights”, the opening song, remains one of my personal all-time favourites. What a way for this new line-up to introduce itself. I still get chills when hearing Ronnie sing “Protectors of the Realm … Captains at the Helm.” Brilliant stuff. Such an incredible wordsmith. Right from the start, this Sabbath sounds invigorating and urgent. Next up, “Children of The Sea” is stellar with nicely restrained verses, which merge into grinding riffing from master Tony Iommi, then to the fantastic chorus. Few albums start with such a powerful one-two punch. Side one of the vinyl release closes with title track “Heaven And Hell”, an all-time epic and a real showpiece for Ronnie’s vocal talents. Side two starts with what I consider to be an overlooked great, “Wishing Well”, which is very catchy yet heavy at the same time. “Die Young” is another standout, for which the band recorded a performance video back in the day. In summary — no stinkers here, no tracks to skip, nothing but great songwriting from start to finish.

Incidentally, this album did very well, particularly in the US where it deservedly earned platinum (one million sales) status. Of course, the band toured extensively to support the release. The US tour with Blue Oyster Cult resulted in a fantastic concert video being released called Black & Blue. Years later, when this line-up (with drummer Vinny Appice) reunited, they titled themselves Heaven And Hell and toured to commemorate the classic tracks from this album and the follow up, Mob Rules.

To close, this is an album that fully deserves its place in your personal playlist. The performances within are absolutely fantastic, and listening to it today is a fitting way to pay homage to one of metal’s greats and dearly departed, Ronnie James Dio.