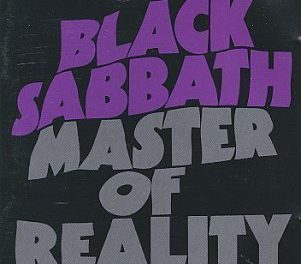 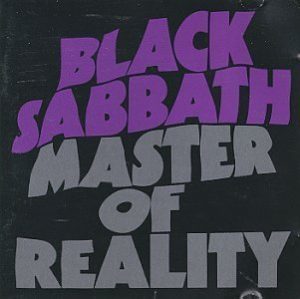 Review:
1971 and Black Sabbath by now have recorded three albums in the span of under two years. Master Of Reality keeps the metal rolling full of everything you would love from Sabbath! More heavy riffs, lots of drums, rocking bass and Ozzy! What more do you want?

Keep on smoking it….

“Sweet Leaf” — “Sweet Leaf” lumbers out the gate with all of Sabbath trucking along. Ozzy sings the tale of rock n roll “When I first met you… didn’t realize” oh oh all aboard the crazy train! Want another round of the great Tony Iommi doom riffs? The solo as well is mind blowing with Iommi plowing away on his six string Gibson SG with Bill Ward and Geezer Butler swerving all over the musical map. The song, before you know it delves, right back into the verse! Pure brilliance! I love you Sweet Leeeeeeeeeeaf! That’s Ozzy saying it, not me! Also full props for Bill Ward doing gong smashes at a couple of points in the tune.

“After Forever” — This is a deadly kick ass track! Butler and Iommi lock up bass and guitars and are in serious musical metal mode here. This song is bonafide Sab classic! It reeks utter coolness. Real cool bombastic riffs and Ward drives the bus with his drums and Ozzy kicks religion in the pants with the lyrics.

“Children Of Th Grave” — Black Sabbath dig deep and kick off “Children Of The Grave” firing on all four cylinders! Cool heavy groove, a quick tempo (for Sabbath) and Ozzy delivers a great vocal! When it comes to Sabbath, they can play any style albeit with a smattering of doom spread throughout. Ward adds some extra percussion to enhance the song. Bravo Billy!

“Orchid” — A nice little Iommi picking on the six string! It’s cool that Iommi could lay down huge bombastic bursts of metal riffs song after song but on the Sabbath albums, he could take a minute or two and give everyone’s ear drums a rest. “Orchid” is that.

“Lord Of This World” — Well so much for chill! Black Sabbath ramp it back up and kick out the jams. Butler plays licks galore while Ward and Iommi lock up, and Ozzy rips a pretty decent vocal. This being album number three, every album, Ozzy is improving as a vocalist. It’s too bad that his zaniness in the ’80s took away his deal as a lead vocalist as he has some serious vocal chops!

“Solitude” It’s that. This is quiet Sabbath. We’re not gonna pound your senses all the time — just most of the time! Kinda funny that they would actually name the tune “Solitude” and it be just that. Ward gets the night off in the studio during the recording of this track. More time for Ward to board the nighttrain and plow through a calvacade of snow on the tracks — if ya get my drift! Nice different picking styles by Iommi.

“Into The Void” — What a way to end the album. This is slippery Sabbath — the one that grooves the best! “Into The Void” builds up to the solo section where Butler is flinging bass lines like Ozzy sniffing lines while Iommi just wails an absolute monster of a guitar solo! “Into The Void” is an end of the album gem! It grabs you, chokes you and pummels your senses into a wall of Sabbath sonics! Just plain huge…

Black Sabbath‘s “Into The Void” song: