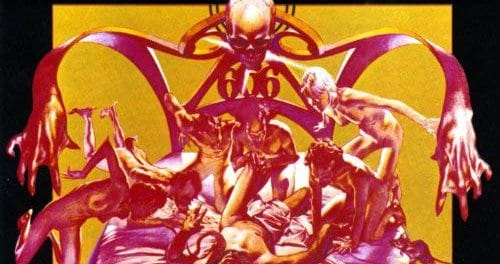 Review:
Aaaahhh … memories. Metal memories. Memories of the fathers of Heavy Metal. I think it was the spring of 1980 (or was it 1981?). I was riding shotgun with a college buddy, hauling butt northbound on Highway 400 in his top-down sportscar. We were enroute to a cottage party. Our soundtrack in the car, at full volume… Lights Out by UFO and Sabbath Bloody Sabbath by Black Sabbath. As Neil Peart said, “Though it’s just a memory, some memories last forever”.

Sabbath Bloody Sabbath was released on December 1st, 1973, and was the band’s fifth album. They were on a tear. The previous four had done well for the band, particularly in the States where they’d done much touring and recording. Having just read Ozzy’s bio, I Am Ozzy, I am surprised that the band managed to produce anything during this period due to their copious narcotic consumption. But produce they did, and Sabbath Bloody Sabbath is a masterpiece which has made many famous musicians’ top 10 lists. All four members were in top form. This was probably Sabbath’s peak (before the Dio years). Pre-production took place in a haunted castle in England. Ozzy and Tony Iommi had an encounter with an apparition during their time there.

Highlights? Let’s start with the album cover. Although the band often stressed that they weren’t into the occult and the dark side, the artwork sure belies that. It is genuinely spooky. I always lean towards the heavy stuff. The lead-off title track is crushingly heavy, a riff for the ages. Sabbath resurrected this riff in an instrumental medley during their final tour. Also, I love “Killing Yourself To Live”, which is Metallica guitarist Kirk Hammett’s favourite track from this classic. The closing track, “Spiral Architect”, is a great tune with very tasteful orchestral accompaniment. The gentle instrumental “Fluff” is worth a mention as well. These were the days when metal bands weren’t afraid to experiment, and had the talent to do so. These eight tracks cover a lot of musical territory.

Many of the songs on the album have gotten the cover treatment. For my money, one of the best has to be Metallica from the Garage Inc. album. They really kick out the jams on a medley of “Sabbra Cadabra” and “A National Acrobat” — clever and unusual choices.

Sabbath Bloody Sabbath is available as a remaster, with extended liner notes.