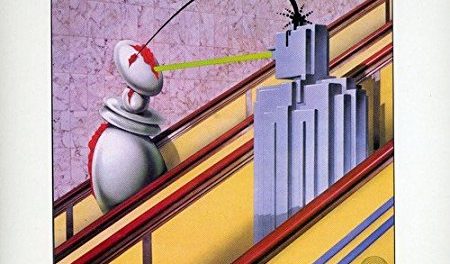 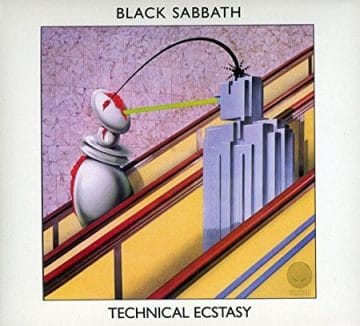 Review:
Interesting turn of events at Camp Sabbath as when Technical Ecstasy is released, the production has changed. Gone is the wicked warmness audio of the first six albums replaced by a more kind of sterile studio sound on Technical Ecstasy. Everything  — even the songs are a different kind of Black Sabbath. Still though, what do you do in Black Sabbath‘s case? Do you keep doing what you’re doing and people will call you out as you’re not changing it up musically or do you in fact change it up and people will still bust your chops about changing? This record for me is Black Sabbath in no man’s land. Trying to move forward yet still trying to keep the crack of the door a little open on their past!

Tony Iommi, Geezer Butler, Ozzy Osbourne and Bill Ward recorded this in Miami! Say no more as I’m sure there was a wee bit of partying going on at Sabbath‘s headquarters and they probably realized at one point “Ummm, we gotta get an album done!”

“Back Street Kids” — Iommi nails a heavy riff and the fellas as they always do join in. Think Heart‘s “Barracuda” pace — not that this sounds like it — just the tempo! “Back Street Kids” is a great song except that Ozzy‘s vocals are terribly mixed. Perhaps that’s due to the sound of the album as a whole but the terrible mix really comes across especially on this song. Ozzy sings the tale of being in a rock n’ roll band going from nothing to something. The middle point of the song has a good ol’ “synth a roo” making a cameo, which sounds once again like The Who‘s Quadrophenia era. “Back Street Kids” gets the album off to a rocking start!

“Gypsy” — Ward kicks off “Gypsy” with his drums and cymbals smashing around and “Gypsy” ramps Sabbath‘s back up. But wait a minute! This tune almost sounds like a mini rock opera as the song shifts gears, slows down and brings a mid tempo pace along with some keys. “Gypsy” is a real interesting track. A bit of it sounds like Sabbath and a bit doesn’t! Give these guys credit there — baked from the sun recording in Miami and still shaking things up! This is a great song!

“All Moving Parts (Stand Still)” — Love Iommi‘s riff n’ roll on this song and hey, there’s a creepy ’70s synth seeping in the background. Nice pace by the boys here. You know Black Sabbath took on a ton of heat for this record but seriously, these songs are good. It’s funny as even Black Sabbath diss some of this stuff!

“Rock ‘N’ Roll Doctor” — Junkie Sabbath looking for a fix! The lyrics say it all: “If you wanna feel groovy, give the doctor a call. Doctor Rock will help you anytime at all!” Hey readers! That’s the deal of this tune. It’s almost a throw together good time tune and that’s Miami talking I believe. Even dig the honky tonk piano throughout the tune as well. Happy high Sabbath just wanting a good time!

“She’s Gone” — I guess the song “Changes” kind of affected Ozzy and crew as they were trying to write chick songs, at times succeeding and others sometimes falling short. To be honest, this one falls short. When I think of Black Sabbath, I think of heavy doom and gloom. You can’t blame Sabbath as they’re trying to channel their inner self through song! Whoah that’s deep! Ha!

“Dirty Women” — Wow! Black Sabbath ends their album with the eight minute plus “Dirty Women” workout! Basically, it tells the tale of Ozzy wondering around looking to score and picking up a dirty woman. She don’t mess around (could be about hook or smack). Iommi, Butler and Ward pull out all the stops. How about some big drums, loud guitars and pumping bass changing the song structure up and before you know it, back to all Sab hands on deck for a heavy metal workout with Ward smashing his double bass drums at a ferocious clip!

Technical Ecstasy by all accounts is a pretty good album. I know for many out there, it boils down to the first four Sabbath albums and fair enough. Some — and from what I read — the critics bashed this one and the next one (Never Say Die) but as I pointed out earlier, people sometimes have a hard time accepting change. Perhaps these songs aren’t classics but for myself, they’re pretty good and that’s even if the production angle used could have had a little more liveness to it…