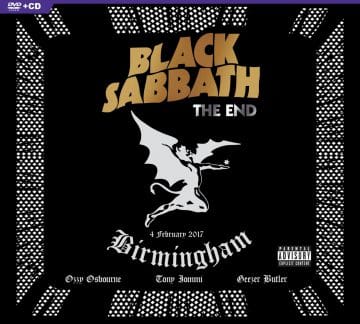 BLACK SABBATH
THE END
To be released on November 17, 2017 (Eagle Rock Entertainment)

Review by Ruben Mosqueda:
As 2017 winds down, the floodgates have opened with labels and bands battling for your holiday dollar with compilations, live albums and DVDs. Rock & Roll Hall Of Famers Black Sabbath wrapped things up in February 4th, 2017 in Birmingham, England; where it all began for them. Naturally, Black Sabbath were going to document this monumental event for the fans to have as a keepsake.

The ‘film’ titled The End hit select theaters earlier in the year and it would have a release date later in 2017. Well, it’s later and ‘The End’ is set for release on November 17, 2017 via Eagle Rock Entertainment. Since The End was shot for a theatrical release the concert performance is brilliantly shot. The film looks downright magnificent. That’s probably the first time that word has been used to describe Black Sabbath.

There is no question that The End is ‘THE BEST’ of the three DVDs that Sabbath has released since their ‘98 reunion. While there’s nothing from their latest (and final) studio effort 13 featured within–that’s no loss to fans. The End is a hits collection with everything you’d expect to be there is in there; “Black Sabbath,” “ Fairies Wear Boots,” “After Forever,” “War Pigs,” “Behind The Wall Of Sleep,” “N.I.B,” “Sabbath, Bloody Sabbath,” “Iron Man,” Children Of The Grave,” and “Paranoid” amongst others. There’s no deep tracks from The Sabs on this one. Sabbath sound about as good as the glorious shots found within The End; albeit tuned down a few notches. Ozzy Osbourne, Tony Iommi and Geezer Butler closed on about as high of a note as they could have in 2017; Iommi has gone on record in recent months and said that he and Sabbath would ‘probably’ perform again in the future. So don’t look at The End being the last nail in their casket. I do have to say that the bonus audio disc of The Angelic Sessions adds value to this DVD and Blu Ray release.

Review by Olivier:
The linear notes in the CD booklet describe very well what Black Sabbath‘s music represents after all these years: “… the music has held up.” Yes, the music has held up splendidly over the 45 plus years since Black Sabbath‘s self-titled debut album. And what has to be a little bit of a surprise is that the fathers of heavy metal are leaving seemingly at the top of their game. Black Sabbath‘s The End DVD captures the group’s last show of their aptly named The End tour, which saw the band do one last comprehensive world tour soaking in the adoration of their many fans. The last show represented on The End DVD took place on February 4, 2017 and must have been extra special for lead vocalist Ozzy Osbourne, guitarist Tony Iommi (the only Black Sabbath member there from start to finish) and bassist Geezer Butler given that the threesome were ending things where it all began — in Birmingham, UK.

The smiles on the sometimes somber Iommi‘s face throughout the DVD give away the special feelings that Osbourne, Iommi and Butler must have felt on this special night. The DVD itself is quite impressive with multiple camera angles giving many different viewpoints of the three veteran rockers plus drummer Tommy Clufetos. The setlist is a greatest hits with few, if any, surprises. It’s a shame that Sabbath didn’t include at least one song from their very strong 13 album such as “God Is Dead?” but aside from that I really can’t complain about the setlist. Ozzy‘s voice sounds very good on The End DVD and better than when I caught Black Sabbath on their The End tour back in Hamilton, Ontario, Canada. Sabbath also played a few more songs on their last show in Birmingham than they did when I saw them live back in February 2016. The crowd seems totally into the show but it’s kind of sad to hear Osbourne ask the crowd if they’ll go extra crazy for the last song. Although the DVD is well done, etc., it’s a shame that Osbourne, Iommi and Butler couldn’t iron out their differences with original drummer Bill Ward for that one last show and have the latter show up to play the last couple of songs. That would have put that performance over the top but I guess it wasn’t meant to be.

Overall, Black Sabbath‘s earlier albums are not surprisingly the best represented on The End DVD with three from Black Sabbath (1970), a whopping six from Paranoid (1970), three from Master Of Reality (1971), three from Vol. 4 (1972), one from Sabbath Bloody Sabbath (1973), one from Sabotage (1975) and one from Technical Ecstasy (1976). As an extra bonus, there are five extra songs that comprise the group’s final studio recordings. I’m not sure how the group ended up choosing to record those songs but they sound really good and have held up quite nicely over time even though many of them date more than 45 years like “The Wizard.” It’s also nice that the band included five songs with the new recordings that could have easily made their way into their setlist but understandably didn’t make the cut. Overall, The End is a nice way to wrap up Black Sabbath‘s touring career. Iommi has already spoken about having the band play a show for their 50th year anniversary so I have a feeling that we haven’t seen the last of Black Sabbath just yet.

Reviewed by Ruben Mosqueda and Olivier for Sleaze Roxx, November 2017

Watch “Paranoid” from The End The final song, from the final performance from Black Sabbath which happened on Feb 4, 2017Available soon on Blu-Ray, DVD, LP …