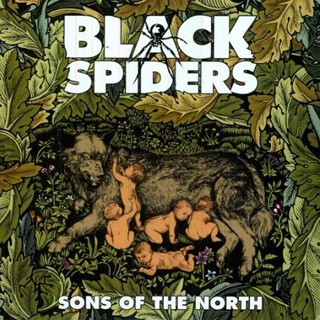 Review:
If Tony Iommi ever runs out of riffs he need look no further than the Black Spiders for ideas. The UK’s Black Spiders have been pilfering and reimagining Mr. Iommi‘s back catalogue (his first four albums in particular) for a couple of years now, releasing three excellent EP’s and now Sons Of The North, their first full length album. The first batch of tracks from the EP’s featured cover versions of AC/DC‘s “Kicked In The Teeth” and Motorhead‘s “No Class”, so that should also shed some light on which particular musical page this lot are on.

Sons Of The North kicks off with “Stay Down”, a fuel injected riot of a song and already a live anthem with its “Fuck you and this one horse town” refrain. This Sheffield outfit’s humor is worn firmly on its sleeves with “KISS Tried To Kill Me”, a song so unbelievably catchy you’ll be singing it for months. It nicks every KISS chord progression and lick going and is an absolute hoot.

The Black Spiders have been touring non-stop it seems now for two years, supporting everyone from The Wildhearts, Airbourne, Black Stone Cherry, Supersuckers and the Stone Gods, and are a very slick machine and this shows through on the album. Tight as nun’s crotch, and with more swing than Frank Sinatra, they’ve managed to recreate the feeling of their incredible live performances on record (or CD, or download, or whatever the hell you’ve managed to steal a copy of).

“What Good’s A Rock Without A Roll?” is the album’s closing track and again highlights the tongue-in-cheek humor that runs throughout with its Led Zeppelin aping and “Eat Thunder, Shit Lightning” bridge.

Heavy and bluesy in places but never losing that rock ‘n’ roll sensibility, Sons Of The North is a fine debut. I’d even go so far as to say that, along with Black Stone Cherry‘s Between The Devil And The Deep Blue Sea, this is probably my album of the year so far. Buy this album and support a band that is definitely going places.