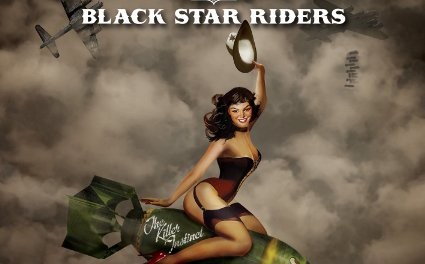 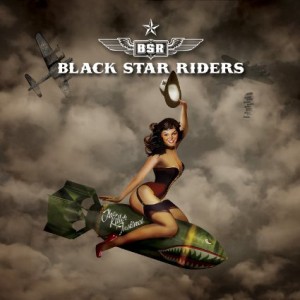 Review:
I am admittedly a little bit late to the party for Black Star Riders given that the ex-Thin Lizzy guitarist Scott Gorham led group have already come up with a debut album All Hell Breaks Loose (that I have yet to completely hear) released in 2013 and The Killer Instinct was released more than ten months ago.

Obviously, I am familiar with the biggest Thin Lizzy hits but it wasn’t until I saw Black Star Riders open for Europe in Sault Ste Marie, Michigan, USA on April 23, 2015 that I really heard Black Star Riders‘ own original material. I remember being impressed with Black Star Riders and vowing to buy both of their albums as soon as I returned to Toronto in Canada. However, months passed by and it was only in the last month that I ended up picking up only The Killer Instinct on the strength of hearing the lyric video for the strong Irish feeling anthem “Soldierstown.” Just like when I saw Black Star Riders in concert, there are a few tracks that stand head above shoulders the rest of the songs delivered by the “new” group made of veteran seasoned musicians.

There are three tracks that stand out from the pack on The Killer Instinct. The title track kicks off with some nice guitar harmonies, is upbeat and has an enjoyable melody to it. “Soldierstown” is by far the best song on the album and although www.setlist.fm states that the song was not played by Black Star Riders when I saw them play in Sault Ste Marie, I swear that they did indeed play that song on that night. As mentioned, “Soldierstown” has a powerful Irish feel anthem to it which should make it a concert staple for the band for the rest of its career. “Charlie I Gotta Go” is a moody rocker that just has a cool feel to it. Unfortunately, after those three tracks, I find that the rest of the songs on The Killer Instinct are rather bland and lack that proverbial punch. All of the songs on the album are well executed but that certain magic that you can feel with the three aforementioned tracks is nowhere to be found on the rest of the record. There is a bonus disc for the deluxe version of The Killer Instinct which consists of two additional tracks and four tracks that get the acoustic treatment. Luckily, two of the three best tracks on The Killer Instinct get the acoustic treatment making the bonus disc worthwhile to listen to.

At the end of the day, having three really good memorable songs on a new album that you can definitely add to your setlist has to be considered a success for a veteran such as Gorham. At least, Black Star Riders have also identified (and perhaps agree with me on) which are the best songs on The Killer Instinct since a video was released for the title track and a lyric video was done for “Soldierstown” enabling them to put their best foot forward with this release.