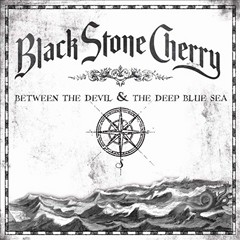 BLACK STONE CHERRY
BETWEEN THE DEVIL & THE DEEP BLUE SEA
Released on May 31, 2011 (Roadrunner Records)

Review:
Black Stone Cherry are back! That’s right, returning with their fourth album (counting their independently released 2003 offering Rock N’ Roll Tape) are those young ass kickin’ Southern rockers. It has been two and a half years since their last CD was released and in the meantime the band have spent the majority of that time touring the world on their own and supporting some of the biggest acts in rock. In the fall of 2010 the band left the comforts of their Kentucky home and entered the studio in Los Angeles with Howard Benson to record the new album — marking the first time they have recorded away from their southern comforts.

Listeners are greeted with an earful of distorted amplifier feedback leading into a slammin’ wah-wah and talk-box laced riff that starts off the first radio single “White Trash Millionaire.” Lyrically the tune is a middle finger to those who look down upon the band members. It definitely gets the album off to a slamming start and continues on into “Killing Floor”. This cut is very reminiscent of Alice In Chains musically and in the verses then kicking into a vocally wide open chorus — the guitars reek of Jerry Cantrell. “In My Blood” slows the pace down just a bit, but not too much. I can envision this mid-tempo number as a future single. It borders on a ballad lyrically but musically has the balls and it doesn’t get watered down into Bon Jovi territory.

The band has progressed in all areas, from songwriting to musicianship — and their harmonies are definitely a notch above what they’ve delivered in the past. It is scary how much talent these guys have and how they continue to get better. While they may not be the biggest thing in rock, what they have going for them is that they won’t be going away anytime soon.

Continuing their tradition of storytelling within their tunes, “Such A Shame” dives into the subject of a young girl from a broken home becoming mixed up in the seedier side of life only to end up dead. I dig the subtle fading female background vocal after the title of the song is sung. This cut could make a really powerful video to show teens there is an alternative to a life of drugs and living on the streets. I don’t think that the band gets as much credit as they deserve for their musicianship but the acoustic fretwork displayed during “Won’t Let Go” is on par with some of the best. I was surprised to learn that Lzzy Hale of Halestorm makes an appearance on the background vocals — she adds a nice haunting touch to this mid-tempo rocker. “Blame It On The Boom Boom” has been around for a while, as it was offered up as a free download from Kentucky-based bourbon company Evan Williams in December 2010. It is a nasty groove rocker that should go over big-time live.

“Like I Roll” is my pick for favorite song on the album. It is a feel-good up-tempo song with a catchy chorus. I can see this crossing over on VH-1 and CMT with the proper video treatment. It is a masterpiece of a tune and could easily have been a John Mellencamp or Bob Seger anthem back in the day. The next cut will be the most scrutinized song on the album as it is a cover of The Marshall Tucker Band‘s “Can’t You See”. They did the track justice — however having seen them cover it live, I feel the production stripped some of the magic of the live version away. Still it’s not a bad rendition, unlike Poison‘s butchering of it from 2007. Fans of Southern rock should be pleased with Black Stone Cherry‘s take on this classic.

“Let Me See You Shake” is a hypnotic groove-rocker that is perfect to listen to while sitting in your favorite whiskey-soaked strip joint while some hottie shakes her tail feather for ya. It felt like I was back in the ’80s when Chris Robertson fired off the lyric, “She squeezed my lemon just to drink the juice!” The band heads into the anthemic mid-tempo ballad territory with “Stay” and I can see the ladies loving this track while it features one of the better guitar solos on the record — it’s just a tad short in duration though. Somebody wake me up cause I’m having a case of deja-vu hearing “Change”, it sure sounds eerily like “Lonely Train” from the band’s self-titled 2006 album. That is not a bad thing though — the vocal breakdown over the solo section is an especially nice touch and John Fred Young channels his inner John Bonham with some sledgehammer-esque drumming.

Paddle faster because I hear banjos!! Gotcha… stand down, it’s just some badass banjo and mandolin pickin’ — nothing to fear with the last track “All I’m Dreaming Of”. This song could easily be titled “Peace Is Free II” as it continues with the theme (or dream) that it drove home. I also hear touches of my favorite stringed instrument, the Dobro. Minus the subtle orchestration and a few sparse electric guitar parts, the song is all acoustic and hand-drumming — definitely an interesting way to close out an album. One day I hope Black Stone Cherry releases an acoustic live CD/DVD in the vein of Tesla‘s Five Man Acoustical Jam — they’re one of the few ‘newer’ bands who have the talent to pull it off.

Overall I feel that Black Stone Cherry has progressed in all areas possible without turning into a ‘radio only’ band. They still groove n’ rock with the best but are not afraid to pick up an acoustic and show a lil’ Southern fried soul. The production on this album is stellar without glossing over the final product and the band is sounding better and better with each passing gig and album.

Reviewed by Justin ‘Crash’ Crafton for Sleaze Roxx, May 2011