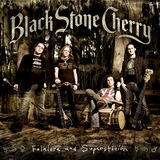 Review:
Black Stone Cherry‘s sophomore album, Folklore & Superstition, has just bumped out Saints Of The Underground‘s Love The Sin, Hate The Sinner as my choice for the best album of 2008. As a fan of their 2006 self-titled debut album, I eagerly awaited the arrival of their second effort and it has exceeded my expectations. For a band whose oldest member is a mere 25 years old, this band sounds skilled and versed beyond their years. Two years of touring with the likes of Black Label Society, Whitesnake, Def Leppard and Buckcherry, along with the fact that drummer John Fred Young‘s father and uncle are both members of the Kentucky Headhunters has really helped Black Stone Cherry to expand upon their sound. They’ve also allowed more of their southern and country influences into the mix. Bob Marlette‘s production has also helped bring out the best in this group. This band, I believe, will be a force to be reckoned with for many years to come thanks to their amazing songwriting, musicianship and hard work ethic.

Kicking off the disc is the pummeling first single “Blind Man”. This hard driving rocker was an excellent choice for a lead single as it gets your attention from the get-go with its distorted riffs and memorable gang-vocal chorus which you will no doubt catch yourself shouting ‘HEY!’ in unison! The second track, “Please Come In”, starts off with a Led Zeppelin-esque riff; this track could easily be a huge hit at rock radio. The lyrics are those that anyone who has been in a relationship can identify with and makes it one of my favorites on the album. “Reverend Winkle” is another chugging rocker where the vocal styling kind of reminds me of the Electric Boy‘s Groovus Maximus album and the solo is a wah-wah infused blues-soaked monster. Four tracks in and these Kentucky born rockers have yet to let up. “Soul Creek” seems to be autobiographical, taking us back to where the band began. Not enough praise can be heaped upon the twin guitar attack of BSC, while young in age, these boys have studied up on their Les Paul history taught by the likes of Jimmy Page, Zakk Wylde and Slash. While the first four tracks are on the heavier side they never forsake amazing hooks and memorable melodies, two essential ingredients for allowing music to make a lasting impression on the listener.

“Things My Father Said” finds the band slowing things down and expanding their musical repertoire by adding a piano into the mix of this heartfelt ballad about the loss of one’s father. This is easily my favorite track on the album. It will touch you in the vein that Black Label Society‘s “In This River” did a few years back. If released as a third or fourth single, this track could help propel the album to wider sales and help prolong its chart success! “The Bitter End” quickly slams the album back into overdrive. This cut eerily reminds me of “Lonely Train” off of their debut album for some reason, but don’t get me wrong, that isn’t necessarily a bad thing. John Fred‘s drumming really shines on this cut. “Long Sleeves” is a mid-tempo tune with a slow drudge feel to it. I could see this cut being stretched out into a Lynyrd Skynyrd-esque jam in a live setting. “Peace Is Free” slows things done a bit and you sense an almost Eddie Vedder like tonality to Chris‘ vocals. The choir-infused chorus really makes this track something special.

Fans of killer fretwork will love “Devil’s Queen”. I dig the lyrical content and can picture a video set in the Mississippi Delta for this cut. The Wurlitzer piano really adds to this song and the last minute really brings to mind another Skynyrd jam ala “Freebird”. “The Key” is another chugging rocker that sees Chris singing in a lower register ala Jerry Cantrell in the verses before heading back into more familiar vocal territory in the choruses. “You” opens up with some beautiful acoustic fretwork interlaced with some Duane Allman influenced slide work. This cut features some of the more heartfelt lyrics showcased on this album. “Sunrise” is probably the most modern sounding track on this offering and I like the subtle Sublime influence that you hear in parts of the song as it is another potential single towards the end of the album’s cycle. The album ends with “The Ghost Of Floyd Collins”, which is a true story of a cave explorer in Kentucky back in 1925 who got trapped and subsequently died in the cave and his body has yet to be recovered. It is another track I could envision an excellent video made for its promotion.

To sum up this album, it is consistent, none of the tracks are duds and each has a little something different to offer. I definitely don’t foresee BSC suffering from the dreaded sophomore slump as long as their record company does their job. For those that purchase the album through iTunes, you will receive three bonus tracks, “Bulldozer”, “Junkman”, and “Stranger”. Albeit these feel like demos leftover from their debut album, but they are still good cuts nonetheless and will be highly sought after by collectors of all things Black Stone Cherry