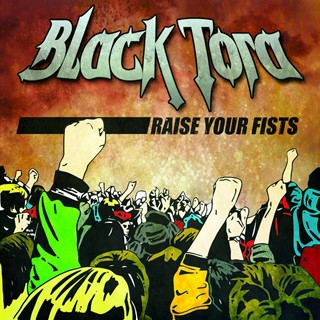 Review:
Everything is bigger in Texas, so it makes sense that Black Tora‘s new EP feels bigger than just a set of five songs from a three piece band. For a group often discussed as one of the up and comers in the genre of heavy metal, would this EP live up to the hype? Simply put, yes — it most certainly does.

The first track, “Never Enough”, is a pretty incredible experience with jet fueled guitars, dirty throaty vocals, and a chorus fit for an arena. The band moves from classic hard rock guitar riffs to glam infused choruses and back with ease. “She Drives Me Crazy” builds off the first track and if you’ll allow me — has a both gritty and sultry sound to it. The song is about a “dangerous girl” so I believe “sultry” applies. Track three, “Shadows Of The Night”, throws us the kitchen sink of slithering guitars and hard hitting drums before slowing it down to tell a tale of fright. Some of the lyrics on this song may be cliche, but the name is “Shadows Of The Night” so this really should be somewhat expected.

If you are looking for the next “Youth Gone Wild” you may want to check out the title track. “Raise Your Fists” is an up-tempo rocker where everything clicks, turning this tune into a fist pumper (pun intended) that begs you to “take control and raise your fists for rock and roll!” For the closer “Wild Child”, it’s easy to picture this song being played live on a big stage… with pyrotechnics, 45,000 fans cheering, and cages of strippers. That is a complement in the highest degree!

Given the result of this EP I do have one criticism — I am disappointed that there was not a full album. I am selfishly telling myself this is a predecessor to something bigger, something to look forward to. Many rock bands influenced by the eighties sound struggle to make it new — however, Black Tora have figured out the formula to inject and make this happen. You don’t have to be from Texas to like this EP, Raise Your Fists is packed with energy and is required listening for anyone searching for something new in the heavy metal genre.