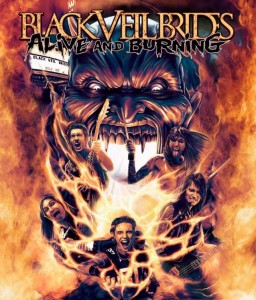 Review:
Let me throw this out there right from the beginning; I’m not a Black Veil Brides fan. I found their image a little bit too close to Motley Crue in their earlier years. In fact, I remember thinking at one point — this band looks like five Nikki Sixxes. Call me the old jaded guy — I get it. Some of that could be true.

When I received Black Veil Brides‘ Blu-Ray review copy for Alive And Burning, I went in with as open of a mind as I possibly could. The video was shot on the band’s ‘Black Mass Tour’ in Los Angeles, California in November of 2014 at the Wiltern Theatre. The band pulled out all the stops and delivered a good looking stage show and energetic performance. The footage runs approximately 75 minutes and captures the band hamming it up for the camera. And why shouldn’t they? They are one of the most popular acts out there right now, whether you like it or not.

As previously stated, I’m not familiar with this band but I will say that the tracks “Last Rites” and “Faithless” are standouts. The band closes their set with a cover of the Billy Idol classic “Rebel Yell.” It’s not going to make you forget the original — but they tried. I’m glad Black Veil Brides have dropped the make-up and have developed their own image, which is a huge plus in my opinion. I’ve got a new amount of respect for these guys. I’m still not a fan but they do put on a show. The Black Veil Brides fans will be lapping up Alive And Burning — you can count on it.