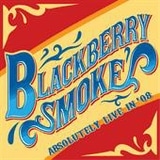 Review:
Play One…Drink One…Hot Damn! Finally, now everyone who hasn’t had the privilege to experience Blackberry Smoke live can do so thanks to this ‘limited time’ exclusive Wal-Mart download only release. This is a must purchase and would go over splendidly at your New Year’s Eve party!

I, after six years, was finally able to experience Blackberry Smoke live in September when they opened up for ZZ Top in Wichita, Kansas and it was well worth the wait! Absolutely Live In ’08, a six song EP, was recorded on various stops along the tour.

The EP kicks off with the mid-tempo rocker “Like I Am” and I was stoked to see that those evil censoring bastards at Wal-Mart never took the time to review this release, because if they had one line in the first track surely would have been bleeped as would a line in “Good One Coming On”. This release really showcases the band for what they are best at, playing as a live band! Their musicianship is top notch with the bourbon soaked vocals of frontman Charlie Starr, and the dual guitar attack of Mr. Starr and his partner in crime Paul Jackson. Also the Turner brothers form one of the best rhythm sections you will ever hear with Richard laying the groove right in the pocket on the bass and Brit slammin’ the backbeat.

Blackberry Smoke really get the jams rolling with the second cut “Freedom Song”, and kind of takes you back to the extended solos offered by Lynyrd Skynyrd. “Good One Coming On” is by far one of my all-time favorite Blackberry Smoke tracks and this rendition doesn’t disappoint, there is nothing better than a tune about drinking Tequila and skinny dipping! “Memphis Special” allows the band to showcase their bluegrass roots Blackberry Smoke-style. The second to last cut is an anthem for men everywhere entitled “Bottom Of This” while the finale, “Freeborn Man”, features some killer harmonica courtesy of Tony Boyd, and this cut also extends into a smokin’ jam with Charlie really letting loose on some mean slide guitar. Blues fans will really dig when the band breaks into “Got My Mojo Workin” in the middle of the track.

Blackberry Smoke is a monster live and this EP really captures both a band at their best and the vibe of one of their shows. The future is limitless for this group due to their stellar songwriting, amazing musicianship and the fact that they are the best live band on the road today!