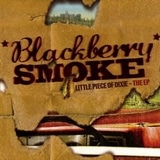 Review:
Released on September 26th to coincide with the opening date of their tour with the legendary ZZ Top, Little Piece Of Dixie gives longtime fans and those catching the band for the first time a taste of what to expect when the full-length arrives in early 2009. The band’s songwriting and musicianship has really grown since their debut LP in 2003, so much so that they’ve caught the attention of uber-producer Dann Huff. Huff is the “IT” producer in Nashville, working with the likes of Bon Jovi, Keith Urban, LeAnn Rimes, Rascal Flatts and Megadeth. He has really captured the true essence of Blackberry Smoke on this release.

Kicking off with “Good One Comin’ On” the EP gets off to a rocking start. Some people may be familiar with this tune if they caught the last Kevin Costner film Swing Vote, as the track is featured towards the beginning of the film. This tune is the ultimate song to kick-off the start to a weekend, my only complaint is the fact the lyrics are changed from what you hear when the band does the song live. “Up In Smoke” kicks off a hypnotic bass groove laid down by Richard Turner and quickly slams into overdrive, fitting, as the track is featured in EA Sports NASCAR 2008 video game.
“I’d Be Lyin” comes from the male point-of-view and really showcases the bands ability to include a wink and a smile within their tunes. They are never too serious, yet can strike a nerve that takes you back to a previous time in your life. The audio portion of the EP ends with my favorite new Blackberry Smoke track, “Shake Your Magnolia”. This rocker is the ideal strip-joint anthem with a killer groove that will have your old lady up shakin’ her ass in no time! Have them dollar bills handy!

As an added bonus, the band has included an enhanced section of the EP, just throw it into your computer and you will be able to access their video for “Lesson In A Bottle”. The band will be out with ZZ Top through October, so go check them out and grab a copy of this EP while they’re hot. It is the perfect soundtrack to anyone’s weekend…and I can’t wait until the LP in unleashed in early 2009.