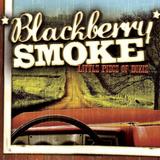 Review:
They’re back, that rowdy bunch of country rockers from Atlanta, Georgia known as Blackberry Smoke! Since they released their debut album Bad Luck Ain’t No Crime in 2003, they’ve released two EPs and logged more miles on the road than Greyhound Bus Lines. They’ve headlined countless gigs all over the US and opened for the likes of ZZ Top, Lynyrd Skynyrd, Shooter Jennings, Montgomery Gentry and David Allen Coe. They’re heading overseas in the latter months of 2009 for the first time.

September 29th brings the release of Blackberry Smoke‘s second full-length album, Little Piece Of Dixie. It is the first release for BamaJam Records, an imprint of James Stroud‘s Stroudavarious Records. The album was produced by Nashville’s most in-demand producers, Dann Huff and Justin Niebank.

The band truly deserve a greater degree of success than they’ve achieved so far, as they’ve certainly worked hard enough for it and done it all for the right reasons. Which are their love of music, their families and the fans who are more like their extended family. If they don’t achieve success in the mainstream than Simon Cowell, and all those other idiots at American Idol who are behind the brainwashing of the world’s music listeners, should be donkey kicked in the head.

Two of the songs on this album have already received mainstream attention. “Good On Comin’ On” was featured in the Kevin Costner film ‘Swing Vote’ and “Up In Smoke” appears on the NASCAR ’08 video game. Throw this album in your CD player, grab your girl, a six pack of beer or a bottle of Jim Beam, fire up some incense, and dig the joyous sounds of America’s next big thing. These guys are that damn good, live and on record, and are great guys to boot.

Blackberry Smoke kicks this eleven song set of tunes off with the all-to-appropriate opening track, “Good One Comin’ On”. Consider this track a ‘warning’ of sorts as to what lies ahead till the album’s conclusion. Sure there are a few stops into some more serious terrain but it doesn’t make this trip any less enjoyable. “Good One Comin’ On” is a feel good mid-tempo rocker that is essential listening for when you clock out of your job on Friday. It will be your anthem all through the weekend. It also sounds great Monday through Friday as well! “Like I Am” is another mid-tempo rocker that has a hypnotic groove throughout. It appears to be lyrically autobiographical with the purpose of asking the woman to accept him and his faults without trying to change him. “Bottom Of This” is a textbook example of one of the reasons I dig this band so much. That is for their lyrics, they have the uncanny ability to tell an amazing story, or as in the case of this track, turn a witty and clever line. Some of their lyrical twists are so subtle you don’t catch them at first, but when you do it is one of those moments where you just smack yourself in the forehead.

Beginning with Richard Turner‘s killer bass run, “Up In Smoke” quickly slams into overdrive. A hard driving and rhythmic rocker that is a road trip tune for the ages, no wonder it was featured in the videogame. “Sanctified Woman” was originally on Blackberry Smoke‘s debut album and it makes a return here, albeit in a slightly different form as it has been re-recorded. The tune is stellar on either album but I prefer the ‘new’ version as the riff has been tightened up, just a little chunkier, the six plus years of playing it live bring the vocals to a better place, Brit Turner‘s drums pack much more wallop and the bass is more in the pocket. Most songs, when they get re-worked, lose something, this one has only improved and that is saying a lot because the 2003 version was damn good.

If there is ever a college course given on how to write a song where you can visualize the lyrics, then “Who Invented The Wheel”, a mid-tempo rocker about love lost that really tells a story and shows that these cats can craft an amazing song, and “Prayer For The Little Man” should be used as the textbooks and the members of Blackberry Smoke should be the professors. And if ever there was a song written with fingers crossed and a tongue planted firmly in cheek then “I’d Be Lyin'” would be it. I really dig the bluesy solo and the background vocals are damn near choir-esque.

If there is any integrity left in the music industry, then “Prayer For The Little Man”, should be a massive hit, if not in the mainstream then at least in the country markets. The song featuring some delicate acoustic work in the intro, lyrics that will hit you right in the heart and maybe bring a tear to your eye (I can certainly relate to this song and if ever given the opportunity there is someone who I’d like to have hear it!), soulful lead and background vocals, and accented by a short yet sweet solo. The band has written their “Stairway To Heaven” in my opinion, with the best song recorded in the past thirty years!

“Restless” is a song about wanting and searching for more, a lesson in never being satisfied with what you have. A full-throttle rocker with some killer wah-wah work and a lyric I can attest to, ‘Can’t get enough ink under my skin’. “Shake Your Magnolia” is a track your woman would love shakin’ her ass to, just don’t tell her it’s about losing a fistful of cash at the titty bar and you should be a-ok! This song also sports my favorite solo on the record, I just wish it was longer…oh well, we all can’t be Hugh Hefner. “Freedom Song” closes out the album with a song for the working man needing a break from the grind of everyday life, a perfect tune to blast while heading down the highway or on a weekend at the lake.

The final track, “Little Piece Of Dixie”, is an internet only download available at www.people.com. Why it wasn’t included on the album I have no idea, but being it is such a great tune, I’ve decided to review it and include the link so you, the readers, could enjoy it. It is a balls-to-the-wall rocker with a message about always having a piece of home with you no matter where you are. Being that Blackberry Smoke are from the South, then they carry a ‘Little Piece Of Dixie’ with them. Brit must have been a tad cranky the day they recorded this because he is killing his drum kit, in a great way, and the solo friggin’ shreds.

Blackberry Smoke is a band of real people who write and record real songs for real people in the real work…enough said. Now go buy the album in stores or on iTunes on September 29th…and don’t forget to check them out when their tour hits a town near you, their live shows are phenomenal. You can thank me later!