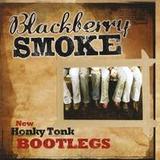 Review:
Anytime you pop in a CD and the opening line to the first song is, “My Momma drank Scotch Whiskey and my Daddy drank Jim Beam”, you know you are in for one helluva good time. And one helluva good time is what you will find with this EP from Atlanta, Georgia’s Blackberry Smoke. Formed in 2000, this quartet is equal parts Southern Rock, Classic Rock, Outlaw Country, Jam Band and Bluegrass mixed with a gallon of your favorite Bourbon and a healthy dose of humor. The band has built up quite a buzz within the industry, mainly due to their live shows. Blackberry Smoke are the ultimate road dogs having done shows and tours with Jackyl, Slash (of Guns N’ Roses, Snakepit and Velvet Revolver), Lynyrd Skynyrd, Shooter Jennings, The Outlaws, Cross Canadian Ragweed as well as just completing a highly successful three month trek with ‘That Lil’ Ol’ Band From Texas, ZZ Top!

The first track, “Son Of The Bourbon” is a tongue-in-cheek mid-tempo rocker full of piss and vinegar that celebrates all things you were told not to experience as a child from booze, drugs and fast women. Beyond all the celebrations of everything naughty there fine lyrical passage at the end of the song that happens to be many people’s motto. “Lesson In A Bottle” is a cut I can see crossing over and being a country radio hit. The vocal harmonies and slide playing are stellar, it is a killer drinking tune. “Keep On Keepin’ On” is sang over some beautiful pedal steel, and the lyrics really hit home about mistakes we make and how we just have to keep our heads up and keep going. Up next is the curveball of the bunch, “The Only Thing She Left Behind”. The first time I heard this song via their video on youtube.com I just about pissed myself with laughter. Not only is the track recorded to sound ‘vintage’, it almost has a Hank Williams Sr. tonality to the vocals and music. This track hits home about a woman leaving with everything a guy has, but pay special attention for the twists. Closing out the EP are two versions of “In A Living Hell”. One is a clean version while the last version is more adult in nature. It is another track showcasing Charlie‘s pedal steel prowess along with the band’s killer harmonies all mixed together with a healthy dose of attitude and humor.

This band has a bright future in front of them. The songs they have written over the course of their debut album, this EP and the soon-to-be-released LP attest to that. To get the true essence of the band, check them out live.