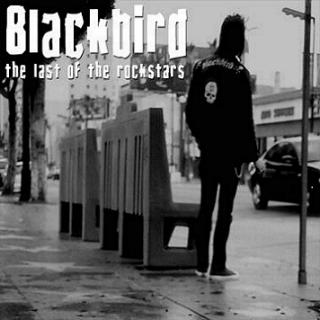 BLACKBIRD
THE LAST OF THE ROCKSTARS
Released 2003 (Blackbird)

Review:
California’s Blackbird called their latest release The Last Of The Rockstars. So I’m sitting here wondering if a rock star’s last gasp would sound like this, and you know – it just might. The disc starts off upbeat and slowly sinks into dreary and downtrodden territory, just like a rock star on his last legs.

I must admit that at first listen I was unimpressed, but their Black Crowes meets Primal Scream sound delivered with the Dogs D’amour attitude has grown on me. “Unstoppable” is as heavy as the band gets with its simple yet contagious guitar structure and pop sensibilities. “Turn Around” has a chorus that somehow reminded me of The Bangles‘ “Hazy Shade Of Winter” while “Never Enough” is raw and shows that the band is more then capable musically. The Last Of The Rockstars is one of those albums that could easily slip by the listener unless they are willing to give it more then one spin, it just seemed to get better and better. More information on Blackbird can be found at blackbirdsnest.com.