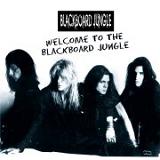 Review:
Blackboard Jungle is a name I had heard several times before, but seeing as their material was hard to find I never got a chance to give them a good listen. All that has changed though, with Welcome To The Blackboard Jungle giving people like me a chance to hear this Sunset Strip cult band. Blackboard Jungle, by many accounts, was the last of the 80s bands to be able to draw a crowd on the Strip during the days when grunge caused a hair metal revolt across America. This latest release from Suncity Records shows how Blackboard Jungle was able to keep relevant in a musical climate that had turned its back on their type of sound.

This collection of unreleased songs span the bands career from their early 1990 recordings with Faster Pussycat‘s Brent Muscat all the way to their last gasp in 1995. Seeing as the band managed to retain a solid following deep into the grunge era, I wasn’t sure what to expect from them. But this isn’t that far removed from sleaze legends like Faster Pussycat and Vain, and to a lesser extent Kik Tracee. One thing that sets them apart is the feeling that there is something dark and sinister lurking deep inside each of these songs. Blackboard Jungle‘s compositions are much more sophisticated than your typical party rock anthems that drove the Sunset Strip sound.

At times you can almost feel the pain and heartache bleeding right through the disc. “Caroline”, which has a chorus that has embedded itself into my mind, is written about a breakup with a girlfriend, “Spring Showers” is dedicated to the deceased Robert Lazaro, and “Little Davey Boy” is about a guy that led the band on – so there is a lot of emotional baggage in these songs. I think I’m starting to understand how Blackboard Jungle kept alive so long, they offered up enough to keep the glamsters happy but at the same time pushed the envelope enough that they didn’t become totally engulfed by the hairband era. Perhaps it was these same factors that kept them from becoming huge back in the day.

The CD booklet comes with all the lyrics as well as Britt Pennella‘s history of each song, something I think every reissue should include. I am enjoying Welcome To The Blackboard Jungle, it takes plenty of twists and turns yet doesn’t lose focus of the original goal. The dark and brooding mood of this disc won’t have you hitting the dance floor, but it will keep your attention.