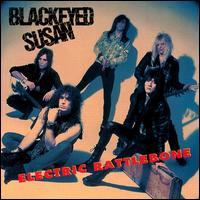 Review:
Electric Rattlebone is the freshman outing from vocalist Jerod (Dizzy Dean) Davidson upon his departure from Britny Fox. Blackeyed Susan also features Cinderella keyboardist Rick Criniti on guitar. The sound on Electric Rattlebone is very bluesy and it shows on songs like “Satisfaction”, “Ride With Me” and “She’s So Fine”. There are also two good instrumentals in “Electric Rattlebone” and “Indica” — which has an Arabian like sound. The ballads, “Sympathy” and “Don’t Bring Me Down”, are a nice addition.

Musically this album reminds the listener of bands like the Black Crowes and London Quireboys. This band was talented and deserved more recognition; it was just another case of arriving on the rock scene too late. Electric Rattlebone receives two thumbs up!