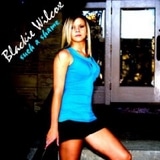 Review:
Such A Shame is an appropriate title for this CD. It’s rather funny, I wrote an entire review of this album thinking that it was a one man project and suggesting he would be better off with a band behind him. Then I found out that Blackie Wilcox isn’t just a guy, but is already a band based out of Chicago and fronted by former Simply Slang member Aaron Morales! Band or not, it doesn’t change the fact that this CD seems very amateurish, right down to the artwork. I get the feeling that this CD was recorded by a guy in his home ‘studio’, fiddling with his latest Pro-Tools purchase with dreams of grandeur and fame flashing through his mind with every note recorded.

You might be thinking that I’m about to rip Blackie Wilcox a new asshole because of this release, but you’d be wrong. I actually don’t mind Morales‘ deep ominous Throbs inspired voice, although he seems to talk as much as he sings, and only once (on “Don’t Wanna Lose You”) did his vocal delivery annoy me. Also, he lays down some impressive guitar work on songs such as “Such A Shame”, “Glamorous Life” and “Lookout”. One problem however is the conflicting messages in the lyrics. “Such A Shame” comes across as preachy with a chorus of “can’t you see there’s so much more to life, then drinking, having sex and getting high” and in the next breath claim “I get my loving anywhere the ladies give some” as the ‘glamorous life’ is the life that he leads. Do these guys want to be Stryper or W.A.S.P.? I get the feeling that as long as success finds them they doesn’t care which way things go.

Is Blackie Lawless in danger of being upstaged by a band with the same first name? Not a chance in hell! Blackie Wilcox and this CD come across as cheap as the sexy tramp on the front cover. But I’m not going to completely write them off yet. Some blood, sweat and tears in the writing department could easily fix the conflicting messages on the songs, and time may be able to tighten the group’s sound and delivery. The raw materials are here, now the guys just have to turn this slab of rock into a diamond.