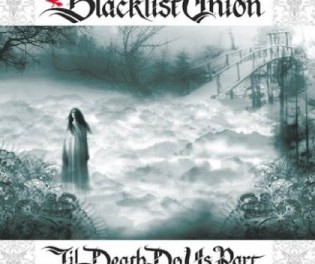 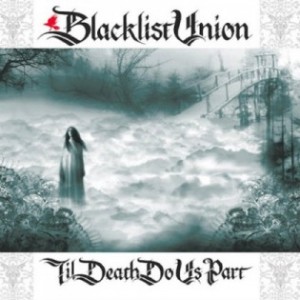 BLACKLIST UNION
TIL DEATH DO US PART
Released on June 13, 2012 (Blu Records)

Granted, we can still do this to a limited extent in the big cities perhaps but flipping through the CD racks (and vinyl too…ha ha — yes, I said old days!) in the metal section at these stores, and looking for the latest, the different, the coolest, is a dying art. I remember finding a used (vinyl) copy of Pantera‘s Projects In The Jungle when I lived in southern California. I picked it up amazed by the artwork, the look and later the music. Nobody in my neighborhood or school even knew who they were and I didn’t two days before either but I took that chance and I love the band (R.I.P Darrell) to this day. So I miss those days and opportunities. I still go to a shop with a metal collection wherever I go and travel to. So it was in those same type of circumstances flipping through the used CDs section that I came across this band Blacklist Union. I knew nothing of them, saw the image and thought “OK! Lets give it a try!” $3.99 is not too much of a loss right?

The CD in question was After The Mourning and I was blown away. The music was trashy, sleazy rock with maybe an ever so slight goth, more darker vibe. Definitely not happy power punk, but gritty rock n’ roll all masterminded by band creator Tony West. I was surprised! Why have I not heard of them? How could nobody have been raving about them? Further investigation and research showed a second CD Breaking Bread With The Devil. The first CD was not a fluke since the second impressed me as much. The songs were catchy, the guitars were punchy, and the bass and drums had that groove — the standard rock n’ roll vibe was there. Songwriter and lone surviving member Tony West (you know the deal — revolving line-up type thing) through it all has maintained a vibe and consistency that just impresses me to no end. He writes with passion and emotion with his songs being life stories, moments in time where you get drawn into it, with the sound, the emotion. And if you can sing along with more than two songs off the album… well mission accomplished.

Like I mentioned, Blacklist Union have a trash, sleaze vibe going — a tad Aerosmith, a bit of LA Guns (West helped sub vocals in that whole two Guns debacle), a smattering of Alice In Chains and even a bit of Gemini 5 but darker. Which now brings me to the third album in their repertoire Til Death Do Us Part.

I will say this — with this CD, the vibe is a bit different, more moodier. The songs are still as catchy as ever with memorable choruses. West still sings with the same passion and emotion but life may be fueling a darker sentiment in the music to go more hand in hand with the lyrics. There is a slight different feel in the songs themselves (again different members/songwriters). The rockers are still there with “Alabama Slammer” and “Diggin 4 Gold” along with the moody, esoteric ones such as “Blown Away” and “Game Over”, to the glam, sleaze rocker “The Lick Kitty Split Theme Song.” Again, I find myself drawn into his lyrics and how West conveys the sentiment and voicing this to get you into the hook and singing along with it. The production is clear and dynamic — maybe a bit less bottom end than previous albums — but nothing to complain about. For those detail oriented rockers out there, Jon E Love of Love/Hate fame has a guest solo on the album. You get a gold Sleaze Roxx merit badge if you own their first album!

All check points are still there and Blacklist Union have created another stellar effort and like in life and with time, we mature and see things a bit different or life weighs on us and we need to release these emotions and let that be a catharsis for us. So Til Death Do Us Part is in no way a doom and gloom album but just a bit different than Blacklist Union‘s previous efforts and still a worthy addition to your own collection. So get this and spread the word or be that cool kid on your block with a band that everybody wants to hear.